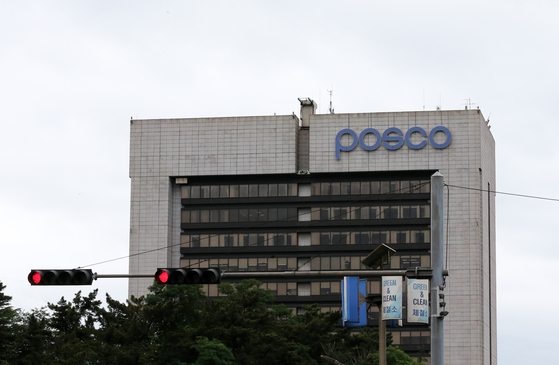 
Posco reported a quarterly operating loss in the second quarter due to sluggish global steel demand as a result of the Covid-19 pandemic.

It was the first time the steelmaker giant reported a quarterly operating loss since it started announcing quarterly results in 2000. Before, it only released results on an annual basis.

Posco predicted a better performance in the third quarter thanks to recent stimulus measures by China's government, which are expected to revive steel sales.

Second quarter sales were 5.88 trillion won, according to Posco in a preliminary report, down 21.3 percent from 7.48 trillion won a year earlier.

Posco said “plummeted demand for steel from the international lockdowns and the strengthening of protective trade” were major reasons for the loss during a conference call on Tuesday.

Stable operation of a gas field in waters off Myanmar helped Posco International's results. The trading arm produces and sells gas to China.

Posco Energy saw its profits in power generation fall due to seasonal factors and weak markets, but saw its LNG terminal business expand.

Posco Chemical’s revenue decreased due to a drop in oil prices, while operating profit was weakened due to an inventory valuation loss in its cathode business. Cathodes' average sales price declined 6.7 percent compared to the previous quarter.

Due to the rise of protectionism abroad, Posco plans to focus on raising sales domestically and generating profits through sales of higher value-added products.

Posco said sales should improve in China, Turkey, Vietnam and Thailand in the third quarter, while making strides in other countries during the fourth quarter.

The steelmaker said it expects exports in the third quarter to improve by 10 percent compared to the second quarter as global automobile factories resume production.

“Although not completely normalized, the factories are expected to recover between 70 and 80 percent,” said a Posco spokesperson during a conference call.

Posco said a dividend for the second quarter will be determined at a board meeting scheduled for early next month.