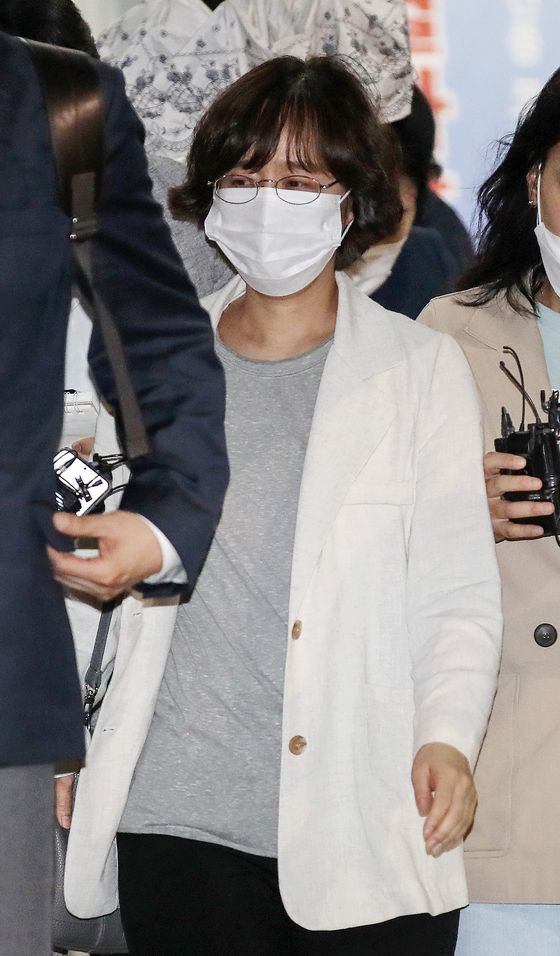 Officers from the precinct said Tuesday she showed up Monday at around 9:20 p.m. and stayed until 3 a.m., two hours of which she spent reviewing her statements and making changes.

Police refused to tell reporters what Lim said during the questioning session, only mentioning that she responded “fairly well,” and that the process went smoothly.

Officers said they mostly asked Lim how she became aware of the sexual harassment complaint filed against Park by his former female secretary, and whether she had personally alerted the mayor about it before he committed suicide.

Lim did not respond to any questions from reporters who had been waiting outside the precinct.

Prior to her appearance, local media had predicted she would show up on Thursday and at a different location other than the Seongbuk Police Precinct — which is investigating Park’s suicide — based on comments from police officers.

But after Lim showed up Monday night, officers said the adviser contacted police earlier that day and said she would soon show up at the precinct to be questioned, implying her appearance was scheduled on short notice.

Lim had earlier refused to show up for questioning, stymieing police investigations.

One officer said Lim has been complaining about her “exposure in media,” adding that she probably chose to come to the precinct so late at night because she wanted to evade cameras.

Lim has long been considered a key witness in the police probe, as she faces allegations of being the first person to have informed Park about his former secretary’s complaint — even before it was formally filed with the Seoul Metropolitan Police Agency at 4:30 p.m. on July 8 — although Lim denied this when speaking to local news outlets last week.

The adviser claimed it was only after Park went missing on July 9 that she learned of the sexual accusations against him. The mayor was found dead on Mount Bukak, near his residence, shortly after midnight on July 10.

The Seoul Metropolitan Police Agency, which is probing allegations that Seoul government officials ignored the victim's calls for help while she was subjected to Park’s sexual harassment, said Tuesday that the victim was summoned for questioning for a second time the day before. On July 14, she was summoned in connection with a different probe, which is examining the online attacks she’s been receiving from Park’s supporters.

The agency Tuesday reiterated its stance not to reopen the sexual harassment case given the death of Park, but said it could still look into the allegations while investigating other complaints filed against the late mayor and his aides.

Park’s former secretary has claimed she was harassed by her former boss for more than four years, since she began working for him in mid-2015. The secretary said Park used to send her photos of himself in undergarments through the encrypted messaging app Telegram, and once kissed her knee after seeing a bruise on her, saying he wanted to make her feel better.

The victim also claimed she raised the issue to her colleagues several times, but was ignored.