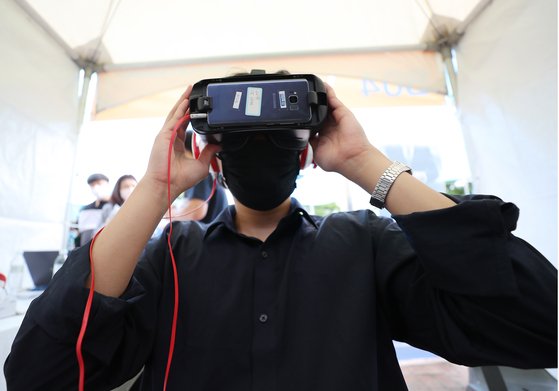 A virtual reality job interview is conducted during a job fair held at Nowon District, northern Seoul, on July 15. [YONHAP]


The number of people studying for jobs in May hit 804,000, a record for the statistic, which has been compiled since 2006.

Statistics Korea includes individuals aged 15 to 29 who take a course or study on their own to get a certain type of job, like a civil service post, in this category.

The May figure is up 12.6 percent from the same month a year ago.

As of May, those studying for jobs were 17 percent of all economically inactive people aged between 15 and 29, which is a 1.7 percentage-point increase compared to the same period a year ago.

“Due to the social distancing this year, it has been tough to look for a job,” said Chung Dong-wook, a statistics agency’s director on employment data. “As such, there's an increase in the number of people studying for jobs or people taking breaks.”

The study has found that it took an average of 10 months for those graduating from schools to land their first job. It took longer for high school graduates compared to college graduates.

On average, high school graduates searched for a year and 2.8 months, while college graduates landed their jobs in 7.2 months. Only half (54.7 percent) of the young people were hired as regular employees, while the rest were hired under contract.

Young people paid 2 to 3 million won accounted for 20.5 percent of the total.

On average, the young people worked at their first job for 1 year and 5.5 months.