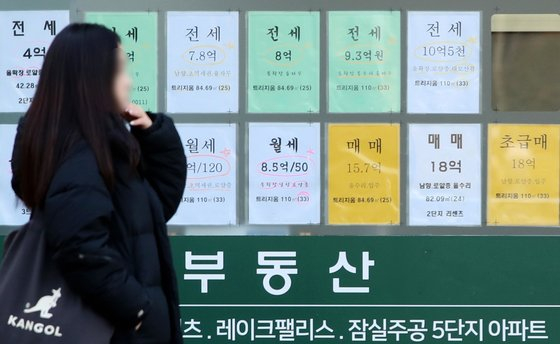 
Despite the government’s efforts to stabilize the real estate market, Seoul’s housing transactions surged in June, reaching a high not seen since 2018.

“It was a result of panic buying as the real estate market is changing rapidly based on the government’s policies,” Kim said. “The price of an apartment unit I was planning to buy jumped by 200 million won in six months. It’s just so impossible for a person in his 30s who was born with a dirt spoon in his mouth to own a home in Seoul.”

Since it took power in May 2017, the Moon Jae-in administration has been desperate to cool real estate prices — so far with little luck.

People continue to rush to buy apartments, pushing prices up.

According to the Ministry of Land, Infrastructure and Transport, 19,463 apartments were sold in Seoul in June, a nearly 90 percent increase compared to May. It was the highest number of transactions in a month since March 2018 when 24,122 were sold.


By region, residential units bought in the Gangbuk area in northern Seoul reached 10,364, a 96 percent increase compared to a month earlier. In one apartment complex in Gangbuk's Mia-dong, 28 apartments were bought in June, while in all of 2019, only 62 apartments changed hands there.

The price of an 84 square meter apartment in that complex, which was about 500 million won last December, reached some 780 million won recently, marking a 56 percent increase. 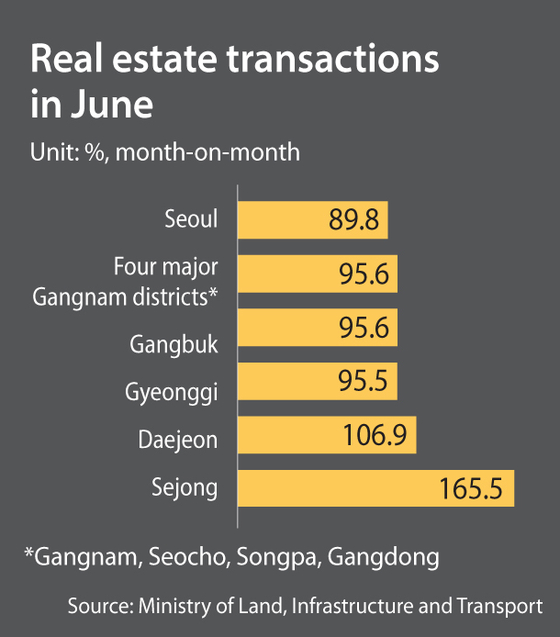 Real estate transactions in the four major districts — known loosely as Gangnam District, Seocho District, Songpa District and Gangdong District — nearly doubled compared to the previous month. More than 43,900 apartments were traded in Gyeonggi Province, compared with some 22,400 in May, a 95.5 percent increase.

In Sejong city, the mini-capital of Korea, transactions soared 165.5 percent while Daejeon saw a 106.9 percent rise.

According to a study conducted by the Korea Research Institute for Human Settlements, the consumer sentiment index for the real estate market in June was 150.1, a 28.6-point increase compared to the previous month. The consumer sentiment index in the real estate market in metropolitan areas was about 140.9, the highest level since July 2017 when the number was 142.5.

The consumer sentiment index, the result of a survey of 6,680 households in 152 cities, districts and counties, as well as 2,338 real estate agents, is represented by values between 0 and 200. If the index exceeds 115, it is considered to be “increasing;” it is “steady” when the value is between 95 and 115; and “decreasing” when the value is below 95.

“The major problem here is that the government is caught in a delusion that the real estate market would change direction in the way it wishes,” Lee Chang-moo, a professor of urban planning and engineering at Hanyang University, said. “[The government] should approve deregulations [of the real estate market] so that it can run its course more naturally following the law of supply and demand.”