When your set is the Philippines, prepare for downpours

When your set is the Philippines, prepare for downpours 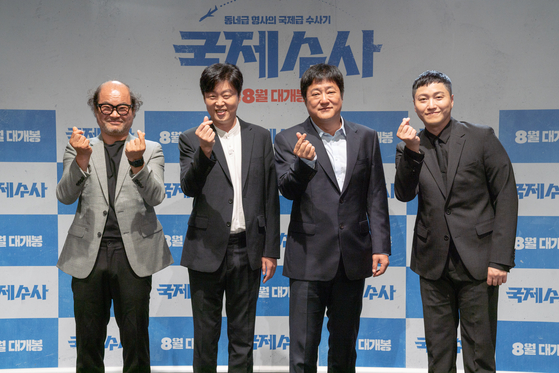 From left, actors Kim Sang-ho, Kim Hee-won, Kwak Do-won and Kim Dae-myung pose for the camera at an online press event for their upcoming comedy "The Golden Holiday." The film is scheduled to be released next month. [SHOWBOX]


In his 17-year acting career actor Kwak Do-won has featured in all sorts of genres, but in recent years, audiences associate Kwak with characters clad in suits working as high-ranking officials — a police officer, a prosecutor, a presidential secretary and the ex-director of the Korean Central Intelligence Agency (KICA).

In the upcoming film “The Golden Holiday,” the actor again, takes on the role of police detective, but this marks the first time he will take on comedy.

“I’ve done a lot of comical roles when I was on stage [in plays],” Kwak said during an online press event on Wednesday. “But I landed the role of a government worker in my first film, and all of my roles following that were similar characters who were creepy, scary or frightening.”

Kwak, however, said that there was nothing in particular he did to prepare for his first comical role.

“All Byung-soo [my character] tries to do is to wiggle himself out of this whole mess, but the more he tries, the deeper he becomes entangled in trouble,” Kwak explained.

The film centers around Byung-soo, a somewhat clumsy police detective working in the Chungcheong region who goes on his first overseas trip with his family to the Philippines.

Somehow separated from his family, the Korean police detective finds himself caught in the middle of a massive crime ring led by evil boss Patrick (played by Kim Hee-won). To prove his innocence, Byung-soo enlists the help of his longtime friends, Man-chul (played by Kim Dae-myung) who works as a tour guide, and Yong-bae (played by Kim Sang-ho), a convict serving his sentence in Philippines.

During filming, the entire cast and crew stayed in the Philippines for over two months as 80 percent of the filming took place there. The audience will be able to get a glimpse of Unesco world heritage sites, everyday streets and even an actual prison in the Philippines.

“When you stay in the same hotel for over two months, there’s really nothing for you to do,” actor Kim Hee-won said. “We would eat together, chat, swap ideas, have coffee and follow each other to set even if we didn't have a scene to film. In a way, it was like going on a tour because every location was new to us.”

However, the actors said that they had difficulty filming in the turbulent weather.

“The weather was unpredictable,” actor Kim Dae-myung said. “It would rain almost every day, and we would all stand by waiting for the moment when the rain would stop and film everything as quickly as we could. [The filming] was possible due to our staff members’ exceptional coordination.”

Director Kim Bong-han also thanked the cast and crew for their teamwork.

“It wasn’t easy, but when the audience sees the film, they'll realize why the setting had to be the Philippines,” Kim said. “Although essentially a comedy, the film is also about trust and questions to what extent we can trust others in our relationships.”