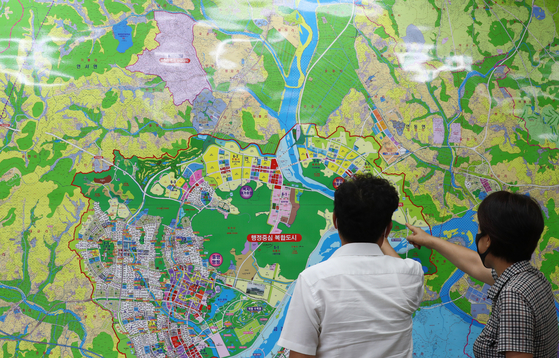 A customer and a real estate agent discuss available apartments at a real estate agency in Sejong City on Wednesday. After the ruling party made public a proposal on Monday to move the Blue House, National Assembly and other government offices to Sejong, asking prices for property in the city rapidly rose, the agent said. [YONHAP]


The ruling party’s idea to move the Blue House and the National Assembly from overcrowded Seoul to Sejong is gaining public support, an opinion poll showed Wednesday.

According to the Realmeter polling company, 53.9 percent of adults nationwide said they support the relocation of the legislature and the presidential office to the Sejong Special Autonomous City, about 121 kilometers (75 miles) south of Seoul. According to the survey, 34.3 percent opposed the move.

The poll was conducted on Tuesday, one day after the ruling Democratic Party (DP) made a surprise reintroduction of a proposal shelved 16 years ago to make Sejong the country’s full administrative capital.

The relocation plan was strongly backed by liberals. According to the poll, 69.1 percent of DP supporters said they supported it; 77.3 percent of Openminjoo Party and 79.5 percent of Justice Party supporters also backed it.

Among supporters of the conservative main opposition United Future Party (UFP), 34.4 percent supported the relocation plan and 54.8 percent opposed it.

The poll was commissioned by internet media outlet OhmyNews. Its confidence level was 95 percent and the margin of error was plus or minus 4.4 percentage points.

In a National Assembly speech on Monday, Rep. Kim Tae-nyeon, floor leader of the DP, proposed that the National Assembly, Blue House and key ministries in Seoul move to Sejong. He said the relocation would decentralize Seoul and nearby areas and curb skyrocketing housing prices in the overcrowded capital region.

According to a DP source, Kim floated the idea based on a survey conducted by the party last week. The DP conducted a poll on July 17 and 18, the source told the Joongang Ilbo.

“In our poll, 62 percent supported the idea, while 33 percent opposed. Five percent did not answer,” the source said. “We concluded that public sentiment is different from 16 years ago.”

After he was briefed about the poll on Sunday morning, Kim decided to include the proposal in his National Assembly speech Monday.

Building an administrative capital city in the Chungcheong region was a presidential campaign pledge by Roh Moo-hyun in 2002. He took office in 2003.

In December of that year, a bill to build a new administrative capital was passed by the National Assembly. Both Roh’s ruling party and the conservative opposition Grand National Party (GNP), a predecessor of the UFP, supported it.

Although the GNP initially voted for the relocation plan in 2003 to win Chungcheong votes in the April 2004 general elections, it suffered a crushing defeat to Roh’s Uri Party, particularly in that region.

A series of street demonstrations followed, and Park Geun-hye, GNP head at the time, officially announced the party was withdrawing its backing of the project. Protesters also filed a petition to challenge the constitutionality of the law governing the capital project.

The Roh government subsequently revised the plan and developed the Sejong Special Autonomous City in the heart of the Chungcheong region in 2005 and relocated some government offices — but not the National Assembly, Blue House or other key ministries such as the Foreign Ministry. The Supreme Court and the Constitutional Court also remained in Seoul.

DP Rep. Kim Doo-kwan said Wednesday that he will resubmit a 16-year-old bill to the National Assembly to complete the late president’s vision. Kim served as the minister of administration and autonomy in the Roh government in 2003. He was one of the main architects of the ambitious administrative capital project.

“I will sponsor this bill again after 16 years,” he wrote in a Facebook post. “Other than this proposal, there is no resolution to housing, transportation and environmental problems caused by the severe centralization of Seoul.”

Kim said the bill will feature plans to develop Seoul as an economic capital and Sejong as an administrative capital to decentralize the country and spur balanced development. “The Blue House, National Assembly, Supreme Court and Constitutional Court must all relocate for the project’s effectiveness,” he wrote.

Kim said he will collect more signatures from fellow lawmakers and submit the bill to the National Assembly.

DP politicians said a constitutional challenge is destined to take place if a special law is passed again to move the capital. The court may rule differently this time, they said.

“The formation of the Constitutional Court is largely changed,” said a two-term lawmaker of the DP. Since Moon took office, eight out of nine judges of the court were newly appointed. Most of them are liberal.

Lawyer Lee Seog-yeon, who challenged the administrative capital plan's constitutionality in 2004 and won the case, said he will do so again if the Moon government pushes the project. Since winning the case, Lee served as minister of government legislation from 2008 till 2010 in the Lee Myung-bak administration and recently served as deputy head of the UFP’s nomination committee for the April general elections.

“The government and the ruling party are attempting to cover up their complete failure in real estate policy with this unconstitutional plan of capital relocation,” Lee said.

The UFP said it won’t cooperate with the DP. Kim Chong-in, acting head of the party, said the matter was already ruled unconstitutional and there is no need to revisit it.

Some UFP politicians, however, are supporting the plan.

“This is a necessary project to decentralize the capital region and spur balanced development,” Rep. Lee Jong-bae, chief policymaker of the UFP, said.

Is this any way to leave the Blue House?