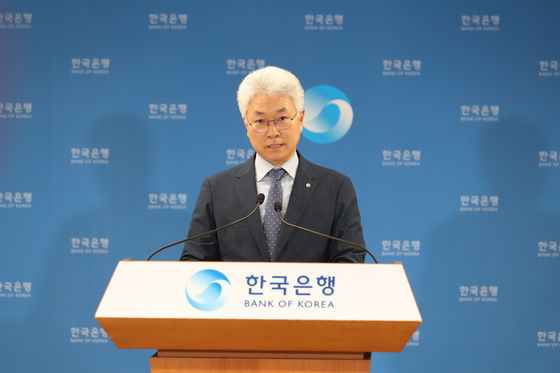 Park Yang-su, head of the economics statistics department at Bank of Korea, speaks during an online briefing on July 23. [BANK OF KOREA]


Korea is in recession, for the first time in 17 years, as exports dropped the most in more than half a century.

According to the Bank of Korea, GDP declined 3.3 percent in the second quarter. That follows a 1.3 percent decline in the first quarter, meaning the definition of a technical recession — two consecutive quarters of economic decline — has been met.

“Advanced countries say they’re in a recession if the GDP growth rate is minus for two consecutive quarters,” said Park Yang-su, head of the economics statistics department at the bank, during an online briefing. “If negative growth continues, we can call it a recession.”

The last time the country recorded two consecutive quarters of negative growth was in 2003.

The drop was led by an export shock as demand for automobiles, coal and oil products fell on a collapse in manufacturing globally. Exports fell 16.6 percent in the second quarter, the biggest decline since the 24 percent drop in 1963. Imports dropped by 7.4 percent quarter-on-quarter.

“Due to Covid-19-driven restrictions by Korea’s major trade partners, demand for automobiles and smartphones has dropped dramatically,” Park said. “Private consumption recovered thanks to emergency disaster relief funds, but the service sector wasn't able to rebound up to a level estimated earlier.”

In May, the central bank forecast a 2 percent contraction in the second quarter when it announced its minus 0.2 percent annual growth forecast.

“The spread of the coronavirus didn't slow as expected,” Park explained. “Exports of goods fell short and the service sector didn't recover as much. As shown in continuous bad employment figures, households weren't in good enough shape to spend money.”

GDP in the service sector fell by 1.1 percent compared to the previous quarter. In the first quarter, the sector had recorded negative 2.4 percent growth.

“About 11 trillion won [$9 billion] of the 13.6 trillion won requested by the people has been reflected in June’s figure,” Park said. "This contributed to the increase in private consumption, but a portion of it was just replacing what has been spent anyhow, which is why the growth in the sector doesn’t seem as dramatic as it should be considering the 11 trillion won spent.”

For the economy to make the negative 0.2 percent full-year forecast by the central bank, 3 percent growth will have to be achieved in the remaining two quarters of the year.

“The situation is similar to the Asian financial crisis back in 1998. The fact that the growth rate was below expectation despite the fact that private consumption improved shows that this economic slowdown will continue for a while longer up to the point where we can call it a depression," Sung Tae-yoon, an economics professor at Yonsei University, said.

Finance Minister Hong Nam-ki is optimistic about the latter half of the year. He said on July 23 that the Korean New Deal initiative, where the government is pledging to invest over 160 trillion won and create 1.9 million jobs over the next five years, will begin to have an effect in the third quarter.

Considering China’s V-shaped recovery, with the country going from negative 6.8 percent growth in the first quarter to 3.2 percent positive growth in the second quarter as the Covid-19 crisis came under control, Hong said Korea’s economy could follow a similar path.

“The government is going to make an all-out effort to back an economic recovery in the latter half of the year,” Hong said. “Including the Korean New Deal initiative, the government will execute 75 percent of the third supplementary budget in the next three months.”

“The recovery in China does suggest a positive outlook for Korea’s economy in the second half,” said Park Sang-hyun, analyst from Hi Investment & Securities. “However, with conflict between the United States and China intensifying, it is hard to predict trade conditions for Korea would get better. And until the export figures get normalized, Korea's economy is hardly likely to make a dramatic rebound.”