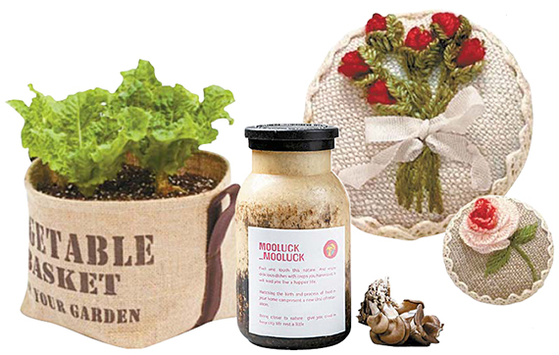 Mushroom-growing and embroidery are some of the most popular DIY pursuits, which have become increasingly popular during the pandemic. [JOONGANG ILBO]

Odd hobbies have become serious pursuits for many in Korea as the pandemic digs in and people have a lot of time on their hands.
The activities, which tend to focus on productivity, include yogurt making, quilting and growing vegetables on the balcony.

Gmarket said Tuesday that sales of products of this kind — broadly labeled as DIY in Korea — doubled from June 19 to July 19.

“As people are spending more time indoors, consumers have been seeking activities that are both entertaining and productive,” said a spokesperson for Gmarket. “The buzz around these DIY products is likely to continue.”

The most commonly seen DIY hobby is gardening vegetables, the psychological benefits of the activity often cited.

In May, “I Live Alone,” a reality television program on MBC, featured professional golfer Pak Se-ri growing vegetables in bulk. Her appearance sparked increased interest in harvesting crops, and the trend is ongoing.

Gmarket said over the month-long period, sales of vegetable garden kits more than doubled on year. Seedlings sales were up 66 percent, and sales of seeds went up by 27 percent on year.

The bean sprout kit and mushroom gardening kit, which only require three waterings a day, are some of the best-selling items.

Products related to handicrafts have also been selling well. Sales of cross-stitch materials went up by 46 percent, beads by 22 percent and quilting gear by 6 percent.

Real-life popularity has been followed by social-media mentions. Posts of finished crafts are crowding Instagram grids, and some share their tips on YouTube. On Instagram, there have been tens of thousands of posts on French embroidery.

Over the past month, tofu and soybean milk maker sales nearly tripled on year.

Sales of yogurt makers went up by 20 percent and sales of other snack-making machines increased by 83 percent. Waffle makers were a popular category, with a 394 percent jump in sales. Bread maker sales went up by 18 percent and ice cream machine sales rose 6 percent.

[WORD_ON_THE_WEB] 'Covid-19 is part of our everyday lives now'

[WORD_ON_THE_WEB] 'Stop insisting on these policies'