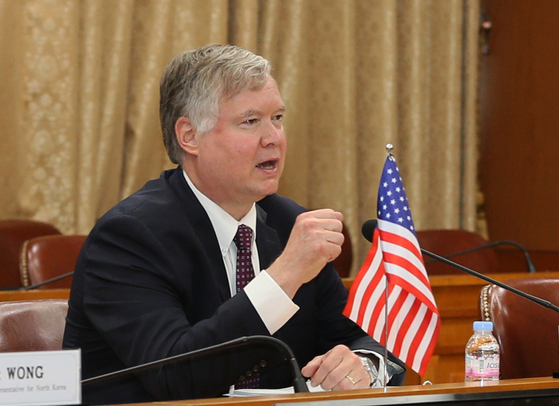 U.S. Deputy Secretary of State Stephen Biegun speaks to officials at the South Korean Ministry of Foreign Affairs in central Seoul on July 8 during a trip to Asia. [JOINT PRESS CORPS]


U.S. Deputy Secretary of State Stephen Biegun told a Senate panel Wednesday that he supports a “substantial” presence of U.S. troops in South Korea, but indicated the issue of burden-sharing must be resolved first.

"There is a consensus in both Seoul and here in the United States that we need to rejuvenate the alliance,” Biegun said, speaking during a Senate Foreign Relations Committee hearing on U.S. policy toward China in Washington. Biegun, who doubles as the U.S. special representative for North Korea, was asked by Sen. Chris Coons, a Democrat from Delaware, how China may view the removal of a “sizable portion of U.S. troops” from the Korean Peninsula, and if doing so could pose a risk to the Seoul-Washington alliance.

“I think what we need to do with the alliance, Sen. Coons, is settle the issue of burden-sharing and how we fund the alliance, and then have also at the same time a strategic discussion to create a sustainable footing for that alliance for the next 75 years," said Biegun. "If we were able to do so, I think a substantial presence in that region would strongly advance America's security interests in East Asia.”

His remarks came after the Wall Street Journal reported last Friday that the Pentagon had presented the White House with options to reduce the U.S. military presence in Korea to below the current 28,500 personnel.

U.S. President Donald Trump has toyed with the idea of a reduction or withdrawal of U.S. troops from South Korea and from other allied countries since his 2016 presidential campaign. The Trump administration’s recent decision to remove of a third of U.S. troops from Germany has put more punch to his words, and Seoul and Washington are currently deadlocked in negotiations to renew their bilateral defense cost-sharing agreement.

Their previous Special Measures Agreement (SMA) expired at the end of last year, and Washington has continued to pressure Seoul to pay more than it is willing to offer.

Biegun referred to U.S. Secretary of Defense Mark Esper’s remarks the previous day and said that the Pentagon chief had been “quite emphatic that he has made no recommendation to the president, nor presented no particular proposal to reduce troops.”

Esper said Tuesday in an event hosted by the International Institute for Strategic Studies that he had “issued no orders to withdraw forces from the Korean Peninsula,” but he added that the Pentagon “will continue to look at the adjustments” to make sure it is “optimizing” U.S. forces. He also indicated he favored the deployment of rotational forces, which could potentially replace the permanent presence of troops in a region.

Biegun told senators Wednesday that the purpose of the bilateral alliance has for 70 years been “to enforce an armistice on the Korean Peninsula against a country, North Korea, of 25 million people, to defend South Korea, a country of 50 million people and 100 times the economy.”

However, he also noted, “In general, the U.S. alliance on the Korean Peninsula plays an incredibly important role in anchoring our strategic interests in the region, not only in relation to North Korea, but also potentially in relation to the challenges that can emanate from the People's Republic of China.”

Biegun said he discussed those issues with his South Korean counterparts during his trip to Seoul earlier this month, which also comes amid an impasse in denuclearization negotiations with the North.

Asked Thursday by a reporter about Biegun’s remarks on the defense cost-sharing negotiations and the possible fallout if an agreement is not reached in a timely manner, Kim In-chul, Seoul’s Foreign Ministry spokesman, said, “The two countries’ governments are working on consultations with a shared consensus that a speedy agreement is needed.”