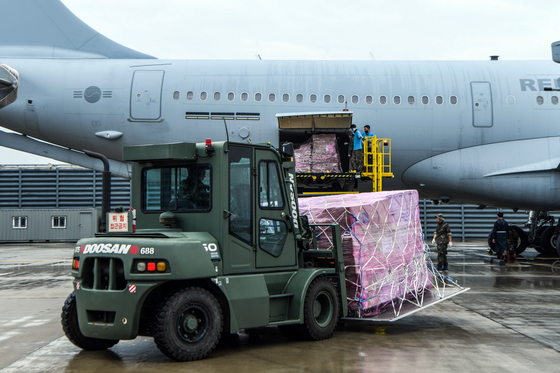 Soldiers load a military plane with face masks and other protective gear Thursday at an Air Force base in Gimhae, South Gyeongsang. Two KC-330 air refueling tankers departed that day for Iraq on a mission to bring home some 300 Korean construction workers. [YONHAP]

At least 16 coronavirus infections have been traced to a Presbyterian church in Songpa District, southern Seoul, leading to a bump in local Covid-19 cases.

Officials from the Songpa District Office said Thursday they don’t know for sure how the first patient at Sarang Church got infected before testing positive on July 20, but that at least 15 more people linked to the church — mostly worshippers — have subsequently tested positive.

The Korea Centers for Disease Control and Prevention (KCDC) blamed adherents for failing to wear face masks properly and going to church even after exhibiting symptoms of the virus. The KCDC also said it appears they held small group meetings and ate together after services, which would be a violation of government guidelines banning such sideline activities.

Nationwide, 59 people were newly diagnosed with the coronavirus Wednesday, 39 of whom were from local exposures. All but nine were from the Seoul metropolitan area: 17 in Gyeonggi, 11 in Seoul and two in Incheon. The rest were from Gwangju.

Twenty people were infected abroad, the KCDC said, nine in the United States, five in Russia, three in Uzbekistan and one each in Britain, Kazakhstan and Tajikistan.

As of Wednesday at midnight, 297 people had died, the same as the previous day, while 12,758 people had fully recovered, up 60 than the day before. 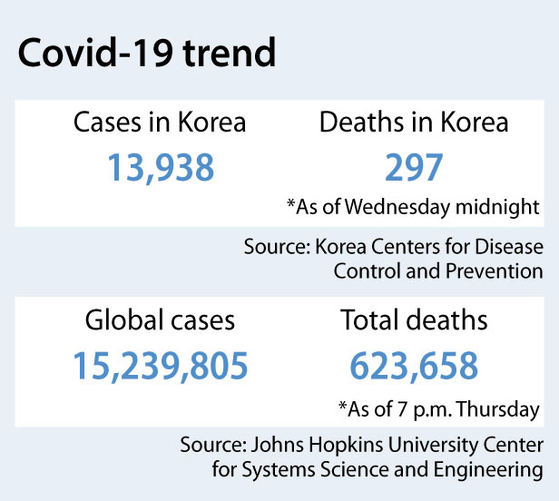 A cluster of infections at a frontline Army unit in Pocheon, Gyeonggi, climbed to 17 as of Thursday noon, including 14 soldiers in the unit. Two other cases were identified as civilian counselors who recently visited the unit and had contact with the soldiers. A relative of one of the counselors has also come down with Covid-19.

Health officials said it appears one of the two counselors brought the virus into the military unit, a man in his 50’s who tested positive on Wednesday at a testing center in Gangnam District, southern Seoul.

Defense officials said the person in question visited the unit on July 16 to provide career counseling, and that 12 out of 24 enlisted soldiers who took his class that day have been infected. The instructor confessed to epidemiologists that he had mild symptoms of the virus when he visited the unit, but that he had no fever, which is how he passed through the front gates of the unit.

Health and defense officials said the instructor visited a few other units in the vicinity as well, and that some 400 soldiers were being tested, though no other person from another unit has shown positive results so far.

In Busan, officials said three more Russian sailors tested positive Thursday after docking at Busan Port. A Korean man who was involved in fixing another Russian ship that had docked in Busan earlier this month came down with the coronavirus as well, but health officials said they weren’t sure whether it was due to exposure to an infected Russian sailor.

At least 46 Russian sailors have tested positive for the virus after docking in Korea over the past month.