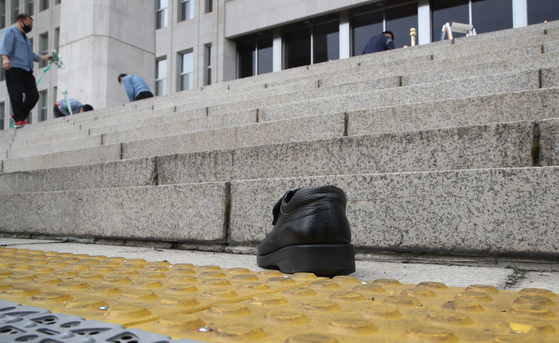 A shoe thrown by a man in his 50s toward President Moon Jae-in when he was on his way back to the Blue House after finishing a speech in the opening session of the new 21st National Assembly last Thursday. [LIM HYUN-DONG]


In front of the Blue House guesthouse on October 8, 2010, a man in a yellow shirt threw a shoe at the podium. Men in black suits wrapped their arms around the podium. One man lifted his bag and blocked the shoe, and a man in a blue vest overpowered the man. The scene was captured and distributed through a news agency. The caption read: “Perfect defense for a thrown shoe.” The situation and the photo were staged. It was the security team’s counter-terrorism demonstration ahead of the G20 summit scheduled a month later. It is supposed to be a counter-terrorism drill, but a shoe — not a bomb or a weapon — was used, and it involved the Blue House security team.

Throwing a shoe as a political expression was popular around the world at the time. The act first garnered attention in December 2008. U.S. President George W. Bush visited Iraq and an Iraqi reporter took off his shoe and threw it at Bush at the news conference.

Imitations followed. Shoes hit or nearly hit Chinese Premier Won Jiabao during a visit to Britain in February 2009, Iranian President Mahmoud Ahmadinejad while touring the country in March, Indian Prime Minister Manmohan Singh during an election campaign in April, IMF President Dominique Strauss-Khan during a lecture in October, Sudanese President Omar al-Bashir as he left his residence in January 2010, Pakistani President Asif Ali Zardari as he set out for an overseas trip in August and then-former British Prime Minister Tony Blair at a signing event for his memoir in September. The defending against thrown shoes was an especially important issue at that particular G20 summit.

Throwing a shoe is all about tainting the honor of the target. Muslims especially consider shoes dirty and unclean. It is ritual for them to wash their feet before praying and taking off their shoes upon entering the mosque. Throwing a shoe, the physically very lowest part of a person, illustrates how little you think of the target.

Shoes are not screened at security checks and are relatively less dangerous. It is very insulting to the person who gets hit. On the other hand, throwing a shoe is seen as a humorous performance in the West. At the time of the incident, Bush asked Iraq not to respond too harshly, as throwing a shoe was a way of expressing oneself. The Iraqi government strictly punished the perpetrator.

Recently, the trend continued as a man in his 50s threw his shoe at President Moon Jae-in. The police ended up filing an arrest warrant, and the court dismissed it.

The shoe thrower, the arrest warrant filer and the court dismissal accurately illustrate the reality of the different levels in our society.

Insulting A man in his 50s A humorous performance

A meltdown gives a warning