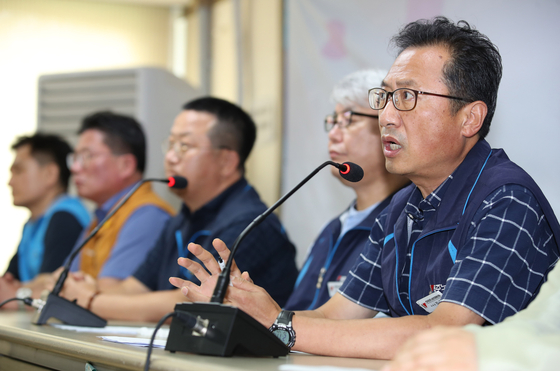 Kim Myoung-hwan, head of the Korean Confederation of Trade Unions, delivers a speech offering his resignation on Friday in central Seoul. [YONHAP]


Negotiations between labor officials, business owners and the government to secure a deal to improve employment stability fell apart late Thursday after members of the Korean Confederation of Trade Unions (KCTU), the largest labor union in Korea, failed to reach a consensus.

The proposal calls for increased cooperation between the three groups, aiming to boost employee retention and strengthen the safety net for workers between jobs or at risk of losing jobs. It was originally proposed by the KCTU to combat the widespread job insecurity created by the coronavirus pandemic.

Kim Myoung-hwan, head of the umbrella union group, offered his resignation to take responsibility for the internal friction that led to the botched deal. But he also blamed hard-line union members for standing in the way of a consensus.

In Thursday's online vote, 805 of the 1,479 registered union representatives, or 61.4 percent, voted against the proposal. Only 499 people, or 38.1 percent voted in favor, while seven abstained.

“I accept the outcome with a heavy heart,” Kim said during a press conference.

“We are facing a big wave of changes introduced by the fourth industrial revolution,” Chung said on Thursday, “I hope that the KCTU can meet the challenge [...] In an era of unprecedented uncertainties, a combination of concession, consideration and moderation is required. But the[KCTU] failed [to display the qualities]."

Even if the government pushes ahead, the labor group’s absence is likely to undermine the significance of the deal.

Earlier this month, a signing ceremony for the proposal was abruptly canceled after the KCTU pulled out at the last minute. Hosted by Prime Minister Chung Sye-kyun, the ceremony would have included businesses promising to work to retain more jobs.

If signed, the deal would have been the first such trilateral agreement in 22 years.

The labor union has walked out of the trilateral meetings since 1998, when the country was faced with its first major economic crisis.