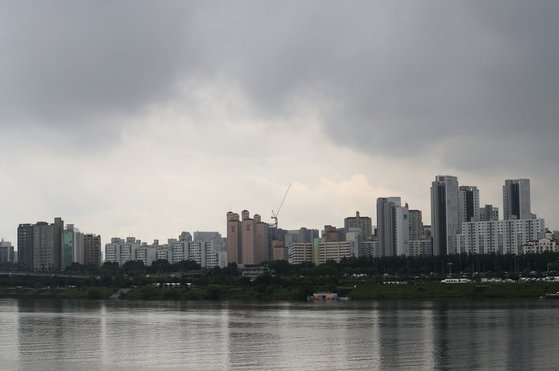 View of Gangnam District, southern Seoul. Apartments transferred to other people as gifts in the Gangnam area skyrocketed in July after the government announced plans to raise comprehensive real estate taxes as a part of its efforts to stabilize the market. [YONHAP]


After the Moon Jae-in administration announced plans to raise the maximum comprehensive real estate tax from 3.2 to 6 percent for multiple homeowners, Koreans are scrambling to transfer their apartments to relatives as gifts.

According to real estate transaction figures compiled by the Supreme Court's Internet Registry Office, an average of 56.5 homes in Seoul were being given away to family members or relatives as gifts everyday before the government’s July 10 announcement of measures designed to cool off the real estate market.

But that number skyrocketed to 311.6 after the announcement, a more than fivefold increase. While the government's statistics don't drill down to the specific type of dwelling, experts say apartments have accounted for the bulk of transfers.

The situation is most evident in the affluent Gangnam District in southern Seoul.

From July 11 to 21, a total of 708 apartments in three districts in the area — Gangnam District, Seocho District and Songpa District, all in southern Seoul — were handed over as gifts. On July 17 alone, 179 giveaways were made, and of those, 75 were from Gangnam District — more than 160 apartments transferred during the first 10 days of the month.

Gift taxes still apply to those transfers, but many homeowners would face stiffer payments if subjected to the newly-raised comprehensive real estate tax.

But under that scenario, if the homeowner transferred one of the apartments to a family member as a gift, their combined comprehensive real taxes would only be about 19 million won next year.

“As multiple homeowners have to pay capital gains taxes anyway [when selling their properties], they would rather choose to pay gift taxes and pass down apartments to their children,” said tax accountant Kim Jong-pil.

Children or relatives who receive apartments from their parents as gifts do not have to pay additional capital gains taxes.

In addition, the government announced plans to increase the acquisition tax for individuals who own four or more apartments from its current 4 percent rate to 12 percent.

The government also said a 20-percent capital gains tax will be applied to yearly profits exceeding 50 million won, beginning in 2023.

“Although the government delayed the implementation of capital gains tax [from 2022] in order to give enough time for multiple homeowners to sell their apartments, they [would] rather tend to give those out to their family members or relatives as gifts,” said Park Won-gab, a senior researcher of the real estate team at KB Kookmin Bank.

To encourage people to actually sell their real estate property, experts say a reduction in capital gains taxes is essential.

“The government should reduce the capital gains tax, at least temporarily, so that multiple homeowners would think that selling [their apartments] is a better option than passing them down as gifts,” said Kwon Dae-jung, a real estate professor at Myongji University’s Graduate School of Real Estate.