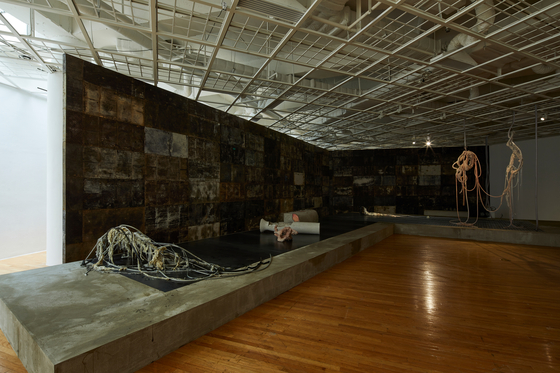 
How difficult is contemporary art to comprehend?

Of course this question is subjective but you'd normally have to visit a number of different galleries to find a range of art considered to show a range of 'difficulty.'

However, at Art Sonje Center, central Seoul, one visit allows you to experience three exhibitions that show a variety of artwork that can be deemed easy, slightly difficult and very difficult to comprehend.

On July 23, three solo exhibitions by three separate artists opened up at the art center. An exhibition by Don Sun-pil on the first floor, Camille Henrot on the second and Lee Mi-re on the third. All three exhibitions will also finish on the same day on Sept. 13, but do keep in mind that this is not a group exhibition and no one subject ties the three together. The only commonality of the three exhibitions perhaps is that installations are the main attractions.

Although the ideas are all different, walking from the first floor up poses an unexpected intellectual challenge as the thought behind each exhibition becomes more complex as you go higher up the building. From easy-to-grab pop art to brain-teasing kinetic art, Art Sonje Center’s new project calls for art aficionados to rise up to the challenge. 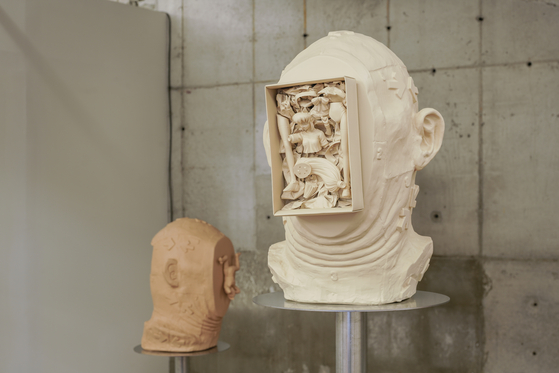 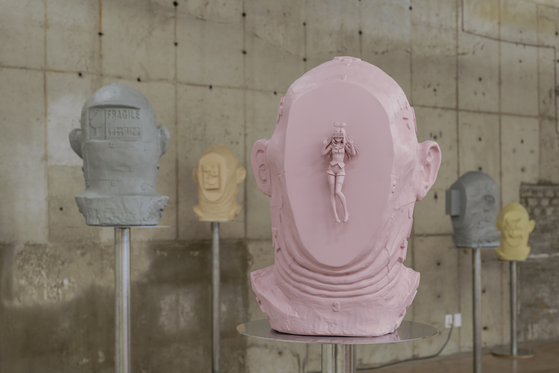 
Of all the features that define a person, one part of the body that we can always trust to identify another person is undoubtedly the face. Even the subtlest differences in facial features can change a person entirely, contrary to changes in other parts of the body that go relatively unnoticed. Yet, when animators or cartoonists depict human characters, it’s often the case that their facial features are more or less the same — it’s the other features such as hair or the clothes that tells one character apart from the other. And it’s this disparity that Don played with.

The title “Portrait Fist” is symbolic of the power that a face has, in the sense of both identification and objectification.

In the exhibition room are 24 pieces of sculptures that have a head without a face — in place of where the eyes, nose and mouth should be are various objects. It could be a cartoon character, piles of boxes or figurines — miscellaneous, meaningless items that are no indication of a person's real identity.

In the middle of the room is a television playing a video of Don’s thought process, as well as a cabinet containing some figurines that inspired him.

“The face doesn’t give much information in [animated] characters, so I wanted to experiment with what other pieces of information could help to convey a character,” he said. “The head only functions as the pedestal for what’s in the face. They don’t really have deep meanings, so the best way to enjoy the work is not to think much.” 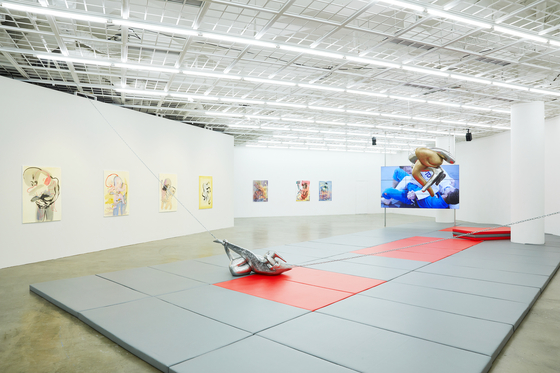 
The first step to enjoying Henrot’s exhibition starts with understanding the title.

“Saturday” is a 19-minute video that found inspiration from the Seventh Day Adventist Church (SDA), an evangelical millenarian Christian domination that practices baptism rituals on Saturday, as opposed to most conventional Christian churches which do so on Sundays.

According to Henrot, who sent a video explaining her work to the local press who could not attend the exhibition due to the coronavirus, SDA is a community “that moves in the same way that the American society and the new media do,” especially in its interests toward food, health and diet and of keeping a good count of your sins and actions.

“They present concern about the transparency of the new media, which serves as a good window to address globalization and transparency of information in the globalized world,” she said.

“Tuesday” on the other hand, takes an etymological approach to the word; it's a piece of multimedia work that is comprised of a 20-minute video and two aluminum installations. The video's narrative is minimal, and features only repetitive images and sounds that almost feel like a lullaby, according to the artist. The footage is of jiu jitsu players, interwoven with images of racehorses — symbolic of competition and tension.

The inspiration originated from how the word Tuesday came from the Norse god of war Tyr, and how violence still dominates this world. Through the jiu jitsu players, Henrot focuses on how they willingly take a seemingly submissive position and then take the power that’s forced onto them to subvert the power dynamic.

The two aluminum sculptures are representative of the entangled limbs of jiu jitsu players that symbolize “ambiguity of submission to power.” 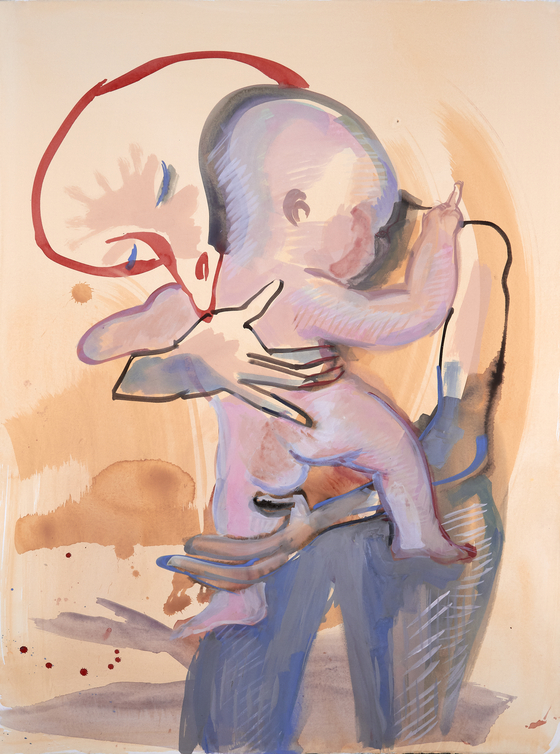 
The last part of the exhibition is a series of 14 watercolor paintings she created last year when she became a mother, which is placed on the walls that surround “Tuesday.” The sound of the video is purposefully meant to accompany the paintings, according to Henrot.

“I wanted to explore the feelings that can only be felt before a child is able to name the objects [around them],” she said. “The idea is about the formation of language and the mouth and the location of the body. ‘Tuesday’ is presented in the same room, because the way it echoes through the room is almost like the things you say when you don’t know what to say.”


Last but certainly not least, visitors are recommended to ready themselves before entering Lee’s exhibition — please heed this advice.

The exhibition builds up an eerie tension with a concrete wall that blocks the sight of the main installation, before you are bombarded with “Carriers” — a kinetic installation that almost looks too grotesque to be called art.

Lee is a young artist born in 1988 who has been known to experiment with materiality and the idea of life. 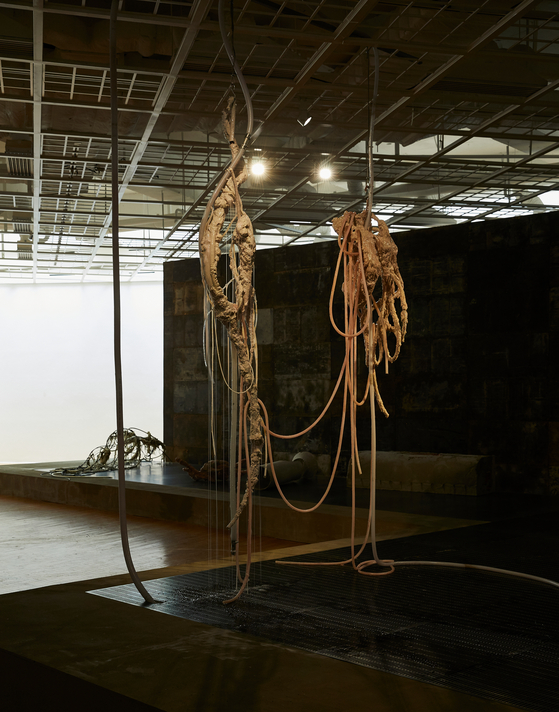 
Tangled wires hang from the ceiling, moving in a slow rhythm while an unidentifiable oozing white liquid drips to the floor before being regurgitated back into the piece to continue a loop of discharge.

In front of the white wires that writhe against the dark background are four installations titled “Horizontal Forms” that lie dead still, in stark contrast to the opposed kinetic work.

The idea for “Carrier” starts from a peculiar fetishism referred to as vorarephilia, which means the urge to devour a living organism alive as a whole — whether that be an animal or a human being. That urge can be interpreted as the wish to become one with another form of life, a biological state that pregnant women are in. That very coexistence with another life then can ultimately be read as “an asexual, abstract state which ultimately evokes the human condition at the most primal of stages,” according to the art center.

“Carriers” thus takes this idea of living organisms and circulation, and the wires are the representation of an animal’s intestines that move, suck, ooze and live. The sound coming from the oozing liquid is also symbolic of the energy that living organisms make in their efforts to fit through a narrow crack to emerge in the outside world, almost like when a child is born. The idea of birth is completed with a short 15-second clip that’s played next to “Carriers,” titled “Sleeping Mom.”

“'Carrier’ can be used and be open,” explained Lee. “Carrier can mean pregnant woman, a commodity transporting something, a person of service, a vessel and a vehicle. You can carry a baby, a disease, liquid and electricity, weights and ideas.”