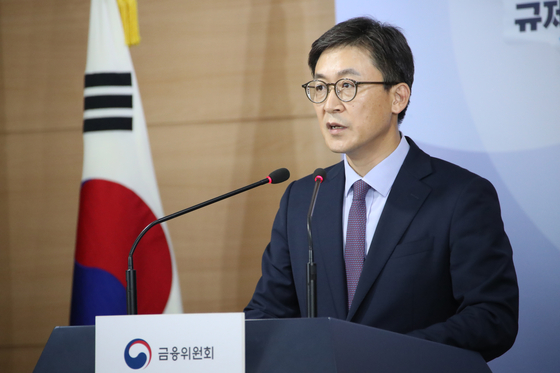 Kwon Dae-young, director general of the Financial Services Commission's financial innovation division speaks to the press on July 24 in Seoul.

The Financial Services Commission (FSC) on July 26 announced a major overhaul of digital finance regulations in Korea, which have changed little since 2006.

Under the new plan, mobile payment service providers represented by Naver and Kakao will be allowed to make deferred payments and issue payment accounts to users.

“No major changes have been made to Korea’s Electronic Financial Transactions Act since 2006, which was even before smartphones were commercialized,” the financial regulator said.

“The system hasn’t been able to adapt to changes made in finance in the face of the fourth industrial revolution and the coronavirus pandemic.”

Mobile payment services providers such as Toss, Naver Pay and Kakao Pay, which operate by users transferring usually small amounts of money to the platform in order to make online purchases or transactions, will now be able to provide deferred transaction services just like credit card companies.

Users will be able to make deferred payments of up to 300,000 won ($250) at once. What this means in practice is that users will not need to transfer money ahead of making purchases, but will be able to pay off their outstanding balance afterwards.

Unlike credit card payments, however, the operator will not be able to profit by charging interest on the deferred amount.

“The new service will allow 'underbanked' users such as newly employed people or housewives to accumulate financial records,” the regulator said in a release.

The limit on how much can be charged to a mobile payment platform will be increased to 5 million won from the current 2 million won in order to enable bigger transactions, such as on travel products and electronics goods.

Daily transactions through the mobile payment platform will be capped at 10 million won.

The regulator said the spending limit will be prone to change depending on the purchase history of the users.

In order to invigorate innovation on digital finance further, the FSC said it will lower the capital requirement on newcomers.

The newly implemented system will allow companies like Naver Financial or Kakao Pay to issue payment accounts where users can make payments on bills such as credit cards, insurance fees and utilities through one account. They are not authorized, however, to save deposits or issue loans.

The capital required for such authorization will be 20 billion won.

The revamped regulation will be proposed to the National Assembly by September.