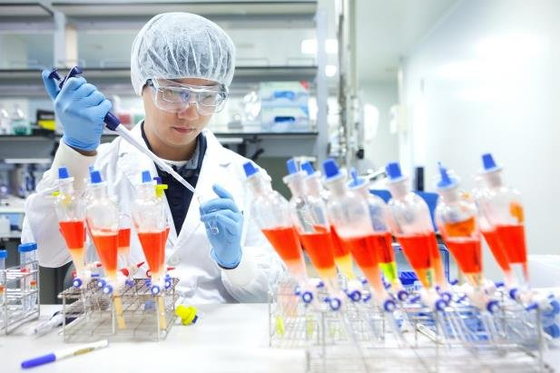 SK Bioscience will start procedures to go public on the stock market next year, the company said Sunday.

NH Investment & Securities and Korea Investment Securities will supervise the public listing, SK said. The bio company said in a Sunday statement that the initial public offering (IPO) is intended to secure cash for business expansion.

The announcement follows the massive IPO of another bio affiliate under SK Group: SK Biopharmaceuticals. On its first trading day, it opened at double its IPO price and placed 27th as the largest company in Korea by market cap.

Having spun off from SK Chemicals in 2018, SK Bioscience is a vaccine company which was recently selected as one of the global contract manufacturers for AstraZeneca’s Covid-19 vaccine, currently undergoing Phase 3 clinical trials. It also won $3.6 million from the Bill & Melinda Gates Foundation to develop a Covid-19 vaccine in May.

According to the Blue House on Sunday, Bill Gates sent a letter to President Moon Jae-in saying he was impressed by Korea’s response to the global pandemic. The two had talked over the phone in April to discuss ways to combat Covid-19, but this was Gates’ first letter sent to the president.

SK Bioscience was mentioned in that message: The Microsoft founder projected the company would be able to produce 2 million Covid-19 vaccines from next June if it succeeds in developing one, adding hopes that a Korean vaccine may benefit those in need all over the world.