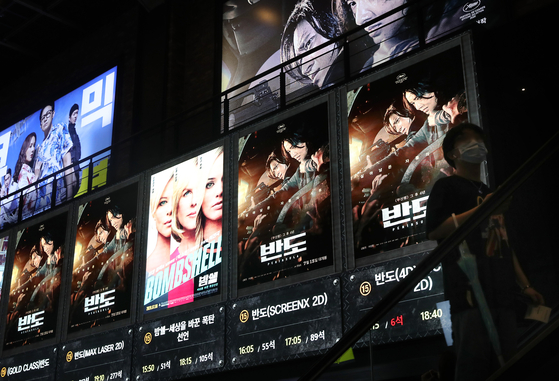 Audience share for local films from July 1 to 23 hit 82.8 percent in part due to the release of the long-awaited zombie blockbuster "Peninsula." [YONHAP]


Korean films are capturing a record percentage of the domestic box office as Covid-19 weakens the foreign competition and as local blockbusters, such as "Peninsula," attract significant interest.

In the first half, Korean films had a 61.7 percent share of the market, the most since the Korean Film Council started compiling the statistic in 2004.

American films did poorly, losing 13.7 percentage points to 31.2 percent. The council said that this was largely due to the outbreak in the United States.

European films picked up some of the slack, with 236 of its films screening in Korea in the first half — 99 of them new releases — up from 128 films in the same period last year.

The surge was in part due to local cinemas holding special screenings of European films from March to May.

As the number of local films began to surge from June, the audience share jumped to 72.1 percent. The number of new releases for June was 12, three more than in June 2019.

The organization forecasts the latter half of the year remaining much the same, as Hollywood blockbusters such as Disney live-action film “Mulan” and Tom Cruise’s “Top Gun: Maverick” are delayed to 2021.

For local films, the audience share increased to 82.8 percent in the July 1 to 23 period due to the release of long-awaited zombie blockbuster “Peninsula.”