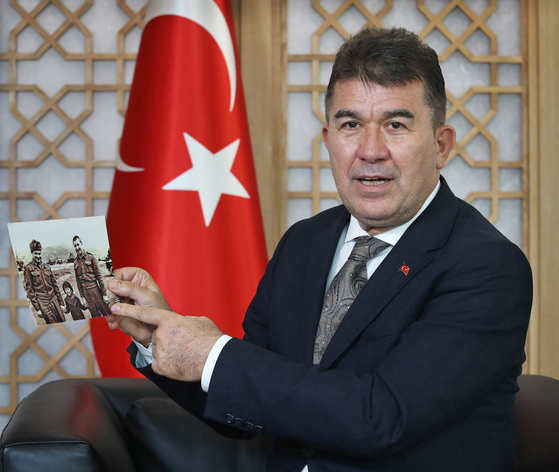 Ambassador of Turkey to Korea, Ersin Ercin, speaks with the Korea JoongAng Daily at the Embassy of Turkey in central Seoul on July 16. He is holding up a photo of Lieutenant Mehmet Gonenc and other soldier with a young Korean girl they found among the ruins of the war. [PARK SANG-MOON]

For 60 years, Kim Eun-ja told no one about her Turkish father and the name he had given her.

“No one else had called me Ayla,” she said during an interview at her home in Incheon on Thursday. “So you can imagine my shock when a government official from Suwon called me up over the phone one day to ask if I was once called by that name.”

Ayla, which in Turkish means the halo of light surrounding the moon, was what Suleyman Dilbirligi, a 25-year-old Turkish soldier, called Kim, then 5 years old, for the year and a half they were together at the Turkish garrison during the Korean War (1950-1953). 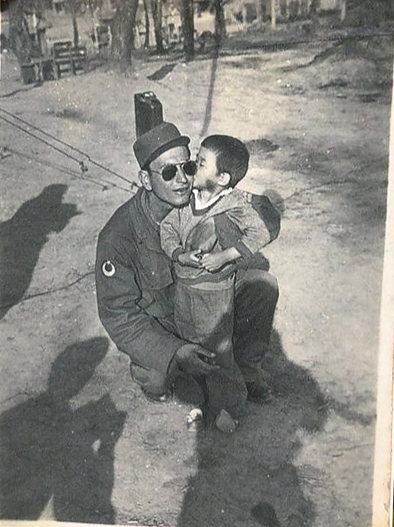 Photo of Kim Eun-ja with Suleyman Dilbirligi, the Turkish soldier who took her into his care after finding her alone among the remains of a North Korean village that he said had been pillaged. The photo was taken by a Turkish soldier at the time, and remained in Dilbirligi's possession until their reunion in 2010. The photo was provided to the paper by Kim. [KIM EUN-JA]

According to Dilbirligi and other Turkish soldiers, Kim was found crying in the midst of a destroyed village in a territory of North Korea in 1950, a scene also depicted in the movie about the pair, “Ayla: The Daughter of War” (2017).

Kim, now 75, still keeps a photograph of herself and Dilbirligi on her bedside table, and says she remembers her time with the Turkish soldiers as the happiest days of her life.

“The soldiers would make clothes for me out of their own battledress, and we would have snowball fights. Sometimes on their off days, Suleyman and the soldiers would take me on a ride on one of the tanks,” she recalled. 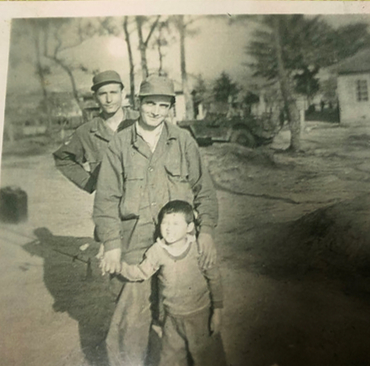 Photo of Kim Eun-ja with Suleyman Dilbirligi. The photo was taken by a Turkish soldier at the time and provided to the paper by Kim. [KIM EUN-JA]

Their relationship came to an abrupt end, however, when Dilbirligi was assigned to Japan.

“I remember holding onto his legs, crying,” Kim said. “He kept saying he’ll come back for me in a few days.”

Days turned into weeks and weeks into years. Kim, deciding that there must be other reasons that are holding her father from returning to the country, decided to make use of her time while she waited. She stayed with her friends at a school set up by the Turkish forces called the Ankara School in Suwon, Gyeonggi.


Like many of her friends there, Kim left the school in her teens to search for work. She took jobs as they came, waiting tables, working at a clothing factory and as an assistant at the gynecology department of a hospital. At age 24 she married someone she was introduced to through a matchmaker. The couple had a son a few years later.

Kim had settled down with a family of her own, but still something felt amiss.

“I was still waiting for my Turkish father,” she said. “I realized, too late, that I knew nothing about him. I didn’t recall his name, I didn’t have any photos of him. All I knew was that he was somewhere in Turkey.”

Because she didn’t have any information about Dilbirligi, Kim said she could not seek help from either the Korean government nor the Turkish government. But the desire to do something about her past grew stronger.

“I think part of the reason why I wanted to find out so badly about my Turkish father was because I did not know where I came from and he was the only root of mine that I could remember,” she said.

Then one day in 2010, a few days after she received the strange call from the Suwon city government, the producer of a documentary for Chuncheon MBC showed up in front of her home in Incheon. They showed her photos of Dilbirligi with her.

“I couldn’t believe it, they said that my father had been looking for me and had contacted Korean tourism offices in Turkey,” she said. “Word got around and reached the producer, who was able to piece together his photos, Ankara School, my close contacts there and me.”

It had been six decades since she last saw him. But there was no mistake in her gut feeling.

“I saw him walk toward me, and his gait, his face — I knew it was my father,” she said.

“Is that you, Ayla?” Dilbirligi asks in the documentary, quickening his pace toward her in a park in Yeouido, western Seoul, in 2010.

The pair soon afterward embraced, with Kim repeating through her tears, “Baba, why did you come so late?” 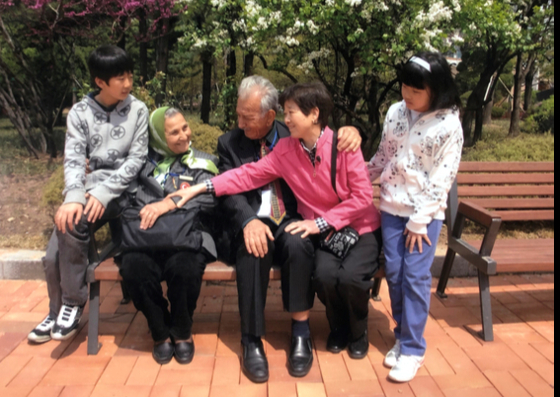 Kim and her family with Suleyman Dilbirligi and his wife Nimet Dilbirligi at the Ankara Park in Yeouido, western Seoul, in 2010, where they met for the first time in 60 years. The photo was provided to the paper by Kim. [KIM EUN-JA]

Ayla’s story is not unique, however. Encounters between Turkish soldiers and young Korean orphans were not uncommon during the war.

“Turkish troops did not only fight against the enemies but also provided humanitarian assistance to the civilians and sheltered orphaned Korean children at the battlefield and took care of them,” said Ersin Ercin, ambassador of Turkey to Korea.

“When the number of these children grew, it posed a challenge to the fighting units that had to ensure their safety. Therefore, they began to send these children to a location near Suwon to take care of their needs in a more organized manner by gathering them under a common roof. They did not want to call it an orphanage and instead named it the Ankara School.”

“As far as I can remember, my life began at the school,” Oh said. “I was there until I became an adult. There were some 60 to 70 other kids, also sheltered by the Turkish soldiers. They taught us Turkish and spent time with us. Folks from the school became like family for us. We still get together for celebrations.” 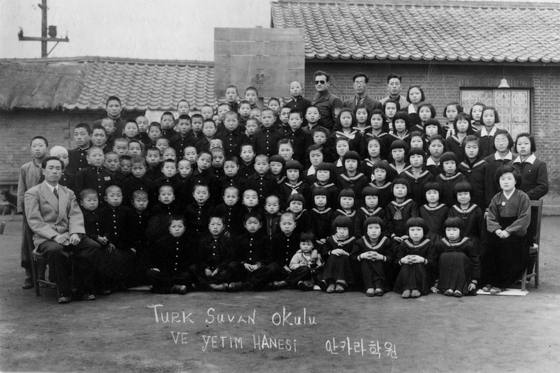 Turkey sent 14,936 men to serve in the war, with the first group of soldiers arriving by September 1950, one of the earliest brigade-level forces to arrive in the country after the outbreak of the war on June 25 that year.

The first battles engaged by the Turkish forces were clashes with Chinese troops in a North Korean region called Kunwu-ri, close to the Yalu River on the Chinese border, in November 1950. They also fought at the Battle of Kimryangjang near Suwon, Gyeonggi, in January 1951; the Battle of Jangseungcheon near Yeoncheon County, Gyeonggi, in April 1951; and the Battle of Nevada Outpost near Gorangpo, Gyeonggi, near the end of the war in May 1953.

The Turkish brigades received awards from both Korea and the United States recognizing extraordinary gallantry and valor.

“By approximately 19:00 o’clock, the Chinese Communist Army had been bombarding, for 40 minutes, the southern Daegwang-ri region in Jangseungcheon where the Turkish brigade was stationed,” Ercin said. “When the enemy ground attack began, the Turkish gunner observation officer Lieutenant Mehmet Gonenc sent a puzzling message.”

Gonenc sent the coordinates of where his troops were and an order for the artillery to open fire there. The artillery liaison officer, confused, asked Gonenc to repeat his order.

“Gonenc told the officer, ‘We don’t want to be taken captive by the enemy! Do not abandon us to the enemy! To be fallen by our own artillery fire is our last wish and hope,’” Ercin said. “He then said, ‘We are sending you the exact coordinates again. All artillery corps please fire at this location!’ That’s according to the military records of Turkey.” 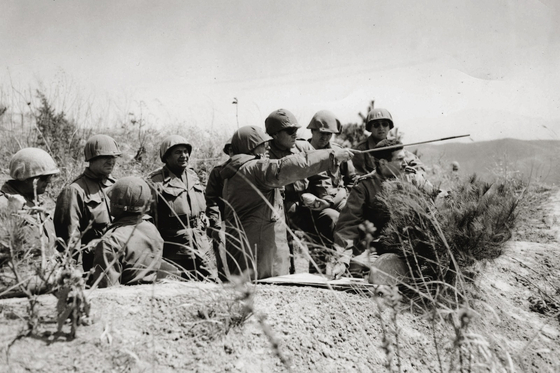 
Turkey lost 724 lives in action during the war. Another 175 soldiers went missing in North Korea, 234 were taken as prisoners of war and 2,493 were wounded.

Battles were often fast-paced and hard to predict, recalled M. Arif Boran, who was deployed in June 1952 and remained in Korea through the end of the war.

“On the 27th or 28th of May in 1953 I was on guard duty with two friends,” Boran said. “All of a sudden, a piece of shrapnel whipped across and impacted the tree just next to us, while two other pieces of shrapnel hit me […] They immediately took me to the hospital by jeep. Everything happened so fast, one moment it was peaceful and tranquil the next it was chaos. If the tree hadn’t been there we would have all died for sure.” 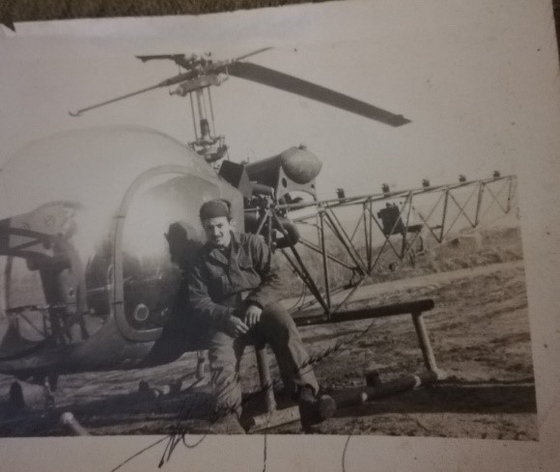 M. Arif Boran, who came to serve in the war in 1952 at the age of 22, in this photo taken around the time of Battle for Outpost Vegas in 1953 in Yeoncheon County, Gyeonggi. [M. ARIF BORAN]

Altogether, nearly 15,000 Turkish soldiers opted to risk their lives for South Korea’s cause.

“We came to Korea on a voluntary basis as part of the 66th division combat squadron,” Boran said. “We were young and ready to explore new horizons and help out our fellow human beings in their struggle for freedom and democracy.”

Some of the veterans have returned through the Korean government’s annual revisit programs.

“I was amazed by where Korea was when I visited 2019, the change was unbelievable,” said Muhit Karaman, who served in the war from 1951 to 1952 as a liaison and logistics officer.

He lost his two cousins, also veterans, during the war. 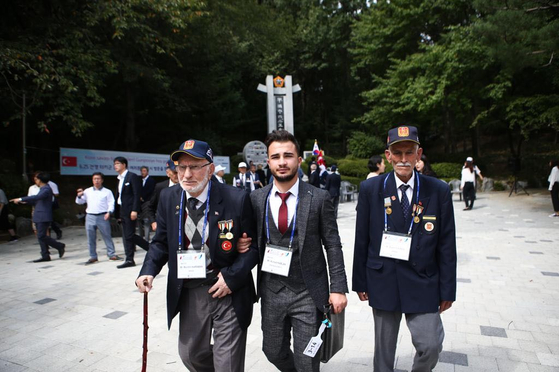 Muhit Karaman, left, during his participation of the Korean government's revisitation program for Korean War veterans in 2019. [MUHIT KARAMAN]

“If you told me that this was a country that has never experienced the devastation of a war, I would have believed you had I not been here myself during the war,” he said. “The skyscrapers, the bridges across the rivers, neat and lined roads in the city, a fast and comfortable train to Busan […] and on top of that, Korea had still retained its culture and values of love and respect all this time.”

“Korea was once tired and worn out with a war in which it paid a very heavy price,” he said. “Now it has become a country with the world’s most advanced industrial and technology giants [...] and is regarded as a fast-paced society. It is very pleasing to see these changes.”

Despite the grueling realities of the war, Ozturk said over the years his experiences have become adventures and tales to tell his grandchildren.

“I am sure that these experiences of ours will be told as fairy tales by our children, like legends,” he said. “Our common history, memories and pain will always keep us together. After all, we may be the first and only nation in the world that calls each other ‘Blood Brothers.’” 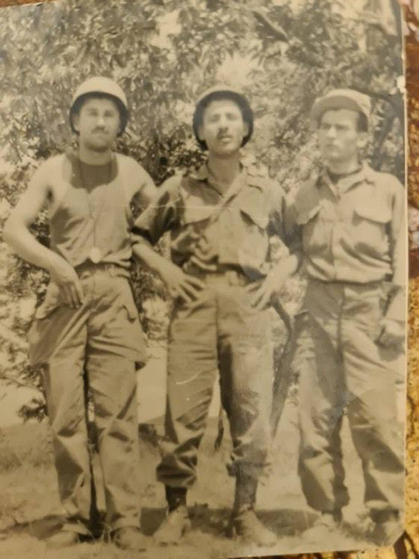 Mehmet Ziya Ozturk, center, in a photo taken during the Korean War. Ozturk was a communications officer for the Turkish brigade and arrived in October 1952 at the age of 21. [MEHMET ZIYA OZTURK] 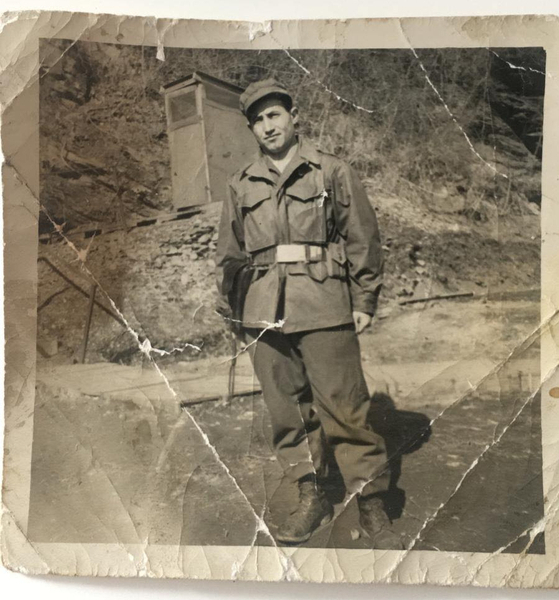 Muhit Karaman served in the war from 1951 to 1952 as a liaison and logistics officer of the Turkish brigade. He was 20 when he arrived. [MUHIT KARAMAN] 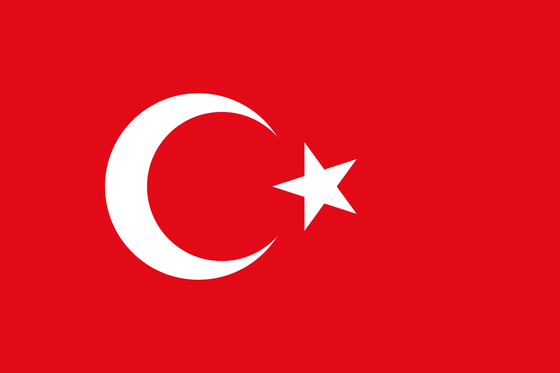 Turkey sent 14,936 men to serve in the Korean War from 1950 to 1953. Turkish brigades engaged in battles including Battle of Kunwu-ri, north of Pyongyang in November 1950 and the Battle of Jangseungcheon near Yeoncheon County, Gyeonggi, in April 1951. A total of 724 soldiers were killed in action, 175 went missing in North Korean areas, 234 were taken captive and 2,493 were wounded.


This series is a weekly publication in cooperation with the 70th Anniversary of the Korean War Commemoration Committee.