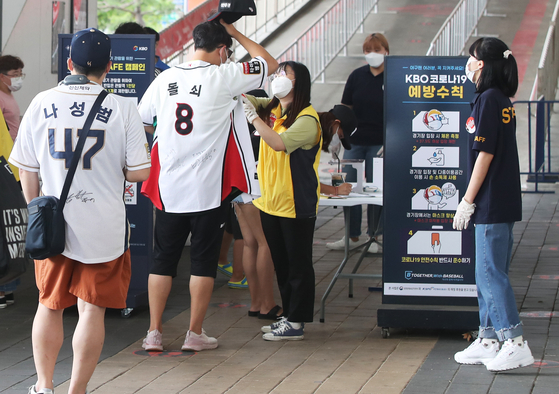 Fans get their temperatures checked as they line up to watch a baseball game at Suwon KT Wiz Park in Gyeonggi Sunday, the first time since the coronavirus pandemic. The Korean government last week announced that spectators will once again be able to watch Korean professional baseball games in stadiums starting Sunday, with seats limited to 10 percent of capacity. [YONHAP]


Korea saw coronavirus cases nearly halved on Saturday after recording over 100 cases the previous day, the highest figure in four months, due to a surge in imported cases from Iraq and Russia.

According to figures released Sunday, Korea reported 58 new Covid-19 cases throughout Saturday, of which 46 were imported, bringing the total to 14,150, according to the Korea Centers for Disease Control and Prevention (KCDC).

The previous day, the country reported 113 new cases, the first time Korea marked a three-digit figure in a single day since 101 on April 1. Of these, 86 were imported cases, the highest number brought in from overseas since Korea reported its first coronavirus patient on Jan. 20. The spike in cases was in large due to infected people traveling from Iraq and Russia.

On Friday, 293 Korean nationals were evacuated from Iraq on two military planes. They were mostly workers at a construction site in Karbala, central Iraq. Health authorities said 86 passengers were showing coronavirus symptoms, with 36 testing positive upon arrival. Another 38 were confirmed as of Sunday.

Three Korean construction workers have died of the coronavirus in Iraq, including one who died last Wednesday while undergoing treatment.

A 7,733-ton Russian fishing vessel with 94 crew members that docked in Busan on July 8 was another infection cluster that has contributed to the surge in cases brought from overseas. Some 32 Russian sailors had tested positive as of Saturday.

Amid concerns of secondary transmission, Busan health authorities said Sunday that the contact of a ship repair technician, who had been the coworker of someone who had boarded the Russian vessel, had also been confirmed to be Covid-19 positive. Some nine people linked with the Russian vessel have tested positive.

Amid the uptick in imported cases since June, Prime Minister Chung Sye-kyun in a coronavirus meeting Sunday called for foreigners to bear the full or partial cost of Covid-19 treatment in the future.

Chung noted the burden on the Korean health care system if there is a continued increase in imported cases addressing concerns over the government providing free treatment. He added, “We will apply a principle of reciprocity taking into consideration diplomatic relations.”

His remarks indicated that free treatment will be provided to nationals from countries that do the same for Koreans. However, exceptions are expected to be made for humanitarian reasons. 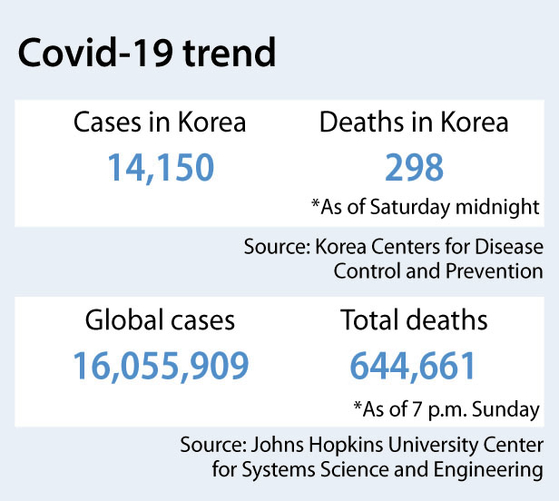 Of the other imported cases reported Sunday, four came from the United States, two from Russia, one from India and one from Hong Kong.

Of the 12 local transmissions reported on Sunday, the lowest number in nearly a week, five were in Seoul, five in Gyeonggi, and one in Busan and Gwangju respectively.

There were no new coronavirus fatalities reported over the weekend and the death toll remains at 298.

New cases in Seoul and the metropolitan area have been linked to offices, churches and elderly care facilities.

A public servant who works for a commission on personal information protection at the Central Government Complex in Gwanghwamun, central Seoul, tested positive Friday afternoon, the first case of infection among civil servants at the complex. The employee’s mother had tested positive on Friday morning.

The Seoul Metropolitan Government also announced Sunday that it will add a feature to its smartphone app from Aug. 3 to report people who are not abiding by the requirements to wear face masks on subways. Complaints can also be made via call centers.

A series of confrontations has been reported due to people refusing to wear masks while using public transportation.

The Seoul Metropolitan Government also said that outdoor swimming pools located along the Han River, usually a cool repose for families in the middle of the city during the summer season, will remain closed this year due to coronavirus concerns.

The city government’s Hangang Project Headquarters announced that it has decided not to operate its three riverside outdoor pools located in Ttukseom, Gwangnaru and Yeouido, and water parks in Nanji and Yanghwa this summer, initially slated to be open from June 26 to Aug. 23.