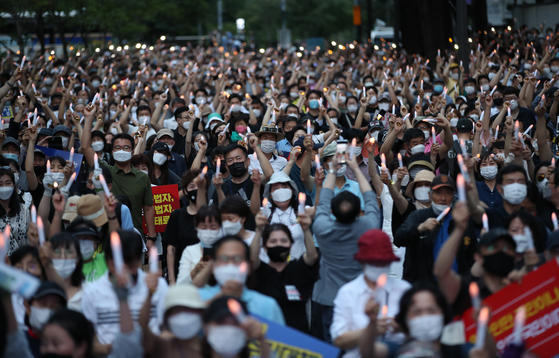 Crowd gathered to protest against the government real estate regulations including higher taxation on the comprehensive real estate tax in central Seoul on Saturday. This is the second week that the protest took place. [YONHAP]

Tenant rights are now the focus of the administration's ongoing efforts to tame the property market.

The ruling Democratic Party (DP) and the government are pushing three pieces of legislation that will stabilize lease terms, conditions and rental rates themselves.

Several relevant legislative proposals were submitted to the National Assembly's legislation and judiciary committee for review on Monday.

The government would like to have a vote on tenant-protection legislation by Aug. 4. Failure to meet that deadline would mean a delay until September, when the regular session begins.

With the DP holding a clear majority, the bills are most likely to be approved without much difficulty.

While the various proposals from the Land Ministry and DP lawmakers have been submitted, they share a number of common elements including guaranteed lease renewals, a 5 percent cap on rent increases and the mandatory reporting of rental rates to the government.

The landlord will only be able to refuse an extension if they are moving into the unit themselves.

“We will prioritize the legislation that strengthens the comprehensive real estate tax and the capital gains tax against multiple homeowners and the three legislations on rents,” Kim said.

Justice Minister Choo Mi-ae said while one guaranteed extension should be legislated, the ceiling on the rent increase should be decided by the local government and should not be higher than 5 percent.

Choo also said the legislation, particularly the bill limiting increases, should be passed as quickly as possible considering the recent moves by landlords to raise rents before the ceiling becomes law.

According to Budongsan 114, a real estate information provider, jeonse prices continued to rise, especially in Seoul and neighboring Gyeonggi.

“The Democratic Party will look into purchases by foreigners,” Kim said.

According to the Korea Appraisal Board, foreigners accounted for 0.86 percent of apartments purchased in the first nine months of last year, marking an increase from 0.64 percent in 2015.

Taxes for foreigners buying real estate in Korea are the same as that for locals. In some countries, different rates apply.

On Saturday, a group of people held a demonstration in downtown Seoul protesting the government’s real estate regulations. People have been gathering for two weeks demonstrating against the war on property.