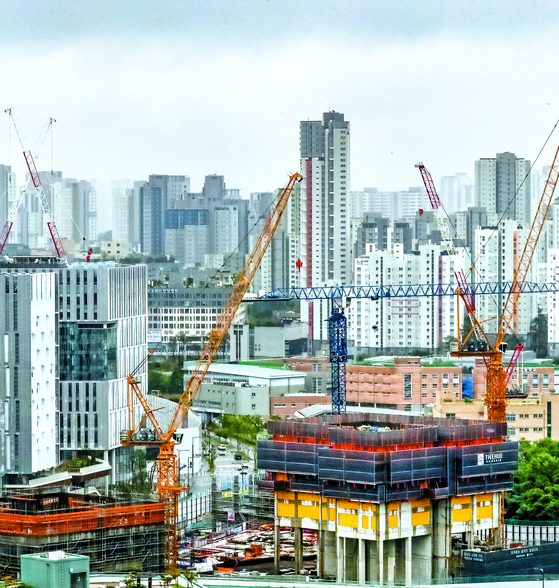 A view of Sejong City. Apartment prices are rising sharply in Sejong City after the ruling party proposed the idea of moving the Blue House, National Assembly and other key ministries in Seoul there. [NEWS1]


Apartment prices are rising sharply in Sejong City after the ruling party proposed the idea of moving the Blue House, National Assembly and other key ministries in Seoul there.

According to the Korea Appraisal Board, Sejong's apartment prices rose 0.97 percent between July 14 to 20 compared to the previous week, the largest increase among all cities in the country. During the same period, the price of jeonse, or long-term housing rental deposits, increased 0.99 percent.

In a National Assembly speech on July 20, Rep. Kim Tae-nyeon, floor leader of the ruling Democratic Party (DP), proposed that the Blue House, National Assembly, and other key ministries in Seoul move to Sejong City. Kim said the relocation would move people out of Seoul and nearby areas and stabilize skyrocketing real estate prices in the overcrowded capital region.

The suggestion translated into a rush for real estate in Sejong.

“On July 22 alone, I received dozens of calls from customers asking about sales of apartments,” a real estate agent in Jongchon-dong, Sejong, said. “The real estate market [in Sejong] is changing so rapidly.”

Despite the Moon Jae-in administration’s 22 sets of measures to cool down the real estate market, the prices of apartments for sale, as well as jeonse deposits, still rise.

A petition on the Blue House website opposing the government’s idea of moving to Sejong City had attracted more than 2,000 signatories as of Sunday afternoon.

On July 25, some 1,000 people staged a candlelight vigil in front of the Korea Deposit Insurance Corporation in Jung District, central Seoul, protesting the government’s retroactive application of higher property and capital gains taxes. Thousands of people holding candles requested the government to come up with “long-term real estate measures.”

During the candlelight vigil, Jeong Chang-ok, who was accused of throwing a shoe at President Moon during a visit to the National Assembly on July 16, joined others in throwing shoes at a chair with the label, "Seat for President Moon Jae-in.”

The controversy deepened after DP Chairman Lee Hae-chan called Seoul a “vulgar city” during an event held at Sejong City Hall on July 24. Chairman Lee, former prime minister of Korea, owns a 653-square-meter plot of land in Migok-ri, Sejong, under his wife's name. A building with 172.53 square meters of space sits on the land, along with 18 square meters of storage space.

In April, DP Chairman Lee caused controversy when he visited Busan ahead of the April 15 parliamentary elections. Lee said, “Every time I visit Busan, I wonder why it is still such a pitiful city.”

Lee’s remark calling Seoul a vulgar city is being criticized by opposition lawmakers.

“All of a sudden, Korea’s capital and second-largest city of Busan have become vulgar and shabby cities,” United Future Party Lawmaker Ha Tae-keung wrote in a Facebook post.