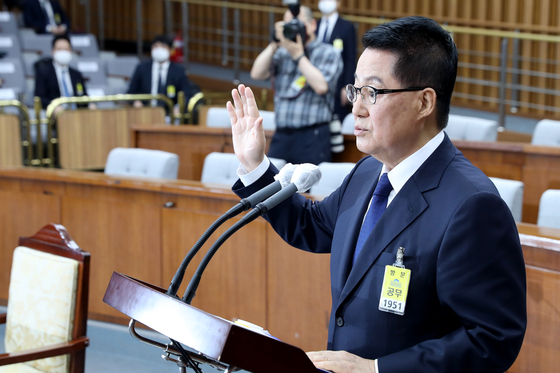 Park Jie-won, nominated to be the next chief of the National Intelligence Service, takes his oath during the nomination hearing at the National Assembly on Monday. [YONHAP]


The Blue House's nominee for National Intelligence Service (NIS) chief told a lawmaker panel Monday that the South Korean government should know when to stand its ground or make compromises when its North Korea policies differ from those of the United States.

“If I am confirmed as the next NIS chief, I will make sure that our North Korean policies are not overruled or overly managed by the United States,” Park Jie-won, the former chief of staff of then-President Kim Dae-jung, said during the confirmation hearing.

"But I also understand that the South Korean government cannot take completely independent actions on the matters of inter-Korean affairs. When we have to cooperate with the U.S. government, we will. But I will make sure that we discern when to stand our ground or make adjustments to our policies.”

A 78-year-old politician known as one of the closest allies of the late President Kim Dae-jung, Park also said that the South Korean government “should turn to all options possible” to help bring about a U.S.-North Korea summit before the end of the year.

“The South Korean government has to be at the center of this movement,” Park said in response to a question from Rep. Noh Woong-rae of the ruling Democratic Party (DP). “I believe that President Moon Jae-in should be at the helm to encourage dialogue and cooperation with the North and that the United States should also be working toward re-establishing dialogue with the North [...] I believe that we should turn to all options possible to bring about the summit.”

During the hearing Park faced allegations that he forged his college credentials and violated the Political Funds Act during his previous campaigns. Lawmakers also revisited Park's violation of domestic laws when he orchestrated money transfers to the North in 2000.

When President Kim met with then-North Korean leader Kim Jong-il in Pyongyang in 2000, Park had traveled to China as a special envoy and met with North Korean officials to arrange the summit.

The Supreme Court sentenced Park in September 2006 for abusing his power and violating domestic laws on foreign exchange trade and inter-Korean cooperation affairs while orchestrating covert money transfers by Hyundai to North Korea.

Hyundai transferred $500 million to the North just months before the summit, triggering criticism that President Kim paid for the summit. Hyundai claimed the money was a payment for exclusive business rights in the country.

“I still don’t agree with the ruling,” Park said during the hearing when Cho Tae-yong, former vice foreign minister and now member of the United Future Party (UFP), brought up the ruling.

“It’s very concerning that you still don’t agree with a ruling when it’s been doled out by the Supreme Court,” Cho said. “I am just trying to make sure that you wouldn’t try to do the same thing when you are NIS chief to try to bring about an inter-Korean summit.”

Cho also brought up a financial statement from the 2015 party convention held by the New Politics Alliance for Democracy, the DP's former name.

“Yes, I borrowed that money from a friend to use for a party convention,” Park replied.

Park denied the allegation, stating that he would not have left any records had that been the case.

A back-and-forth between UFP Rep. Ha Tae-keung and Park turned into a shouting match when Ha argued that Park forged his college credentials.

“There are a number of things that are fishy about your college credentials,” said Ha. “We asked you to submit your college records but you refused to. From what we gathered, it looks like you didn’t earn enough academic credits to graduate from Dankook University [...] We have reasons to believe that you abused your power around year 2000 to change your credentials at the university.”

Park, denying the allegation, said Ha should go ask the university itself, which will disprove his arguments.

“By the way, Rep. Ha, you weren’t even born when I transferred to Dankook University in 1965,” Park said. “You should know that the way things were done and understood was a lot different back then compared to these days.”

The nomination hearing, which began at 10 a.m. Monday, extended into the afternoon behind closed doors as the lawmakers questioned Park on more sensitive issues related to the North and Korea’s intelligence work.

The NIS was established in 1961 during the Park Chung Hee administration. The agency initially supervised international and domestic intelligence, but closed its domestic intelligence bureau in 2017 under a directive from President Moon Jae-in, after the agency was found to have been involved in several scandals, including rigging the 2012 presidential election to sway public opinion on then-candidate Park Geun-hye.