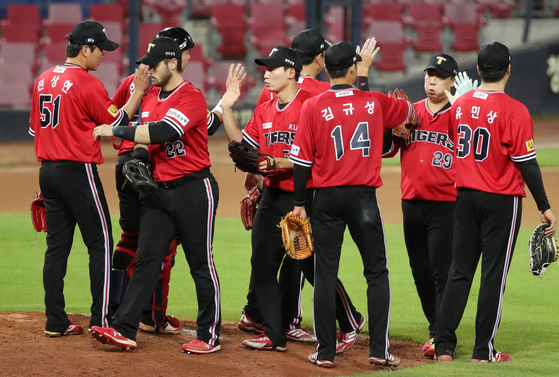 The Kia Tigers players celebrate after picking up a win against the Samsung Lions at Gwangju Kia Champions Field on Sunday. [YONHAP]

The KBO was back in action this weekend, and for the first time this year, fans were actually able to attend games in person on Sunday.

Sunday's games were the first since the delayed season began on May 5 that fans could attend, with stadiums allowed to sell tickets at 10-percent capacity.


Although the Tigers’ Friday game against the Samsung Lions was canceled due to rain, Kia still swept the series with two big wins on Saturday and Sunday.

Hosting the Lions at home in Gwangju, the Tigers picked up a big 8-2 victory on Saturday and another 8-5 victory on Sunday. With two straight wins against the Lions over the weekend, the Tigers are now ranked third in the regular season standings with 37 wins and 29 losses after 66 games as of Sunday. 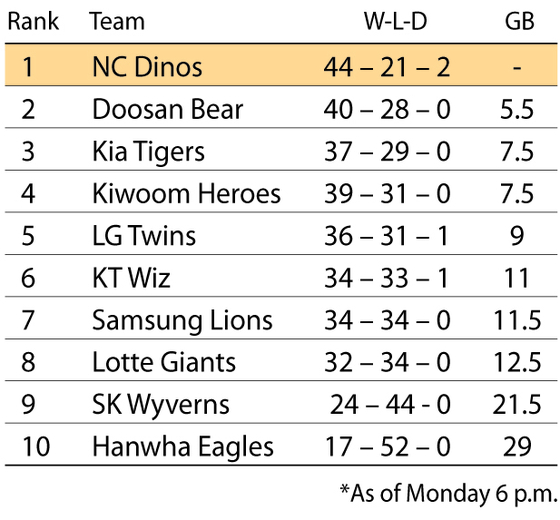 Although the Tigers are tied in game differences with the Kiwoom Heroes, they sneak into third place as they have a better winning percentage, at 0.561.

With the Tigers now ranking third in the table, the regular season standings for the higher ranked teams has gotten a little more competitive as the third-ranked Tigers are only two games behind the second ranked Doosan Bears.

The NC Dinos continue to dominate, however, as they manage to keep a 5.5-game lead ahead of the second ranked team, despite losing two games over the weekend.


Along with the Tigers, the SK Wyverns, the ninth ranked team in the KBO standing, are also on a four-game winning streak.

Playing the weekend series against the bottom ranked Hanwha Eagles, the Wyverns got off to a great start by picking up a 7-4 win. The second game in the series on Saturday was rained off and the Wyverns took another 7-4 win on Sunday. The two teams were set to play again on Monday as the KBO is trying to play canceled games as quickly as possible to avoid a buildup of fixtures at the end of the delayed season.

Unlike the Tigers, the Wyverns’ four-game winning streak hasn't helped much as they are still ranked ninth in the league with 24 wins and 44 losses after 68 games this season.

In Seoul, the LG Twins finally won their series against the Bears. The Twins started off the Jamsil derby with a big 8-1 victory on Friday. Although they suffered a 7-3 loss to the Bears on Saturday, they made a comeback on Sunday, as the Twins picked up a thrilling 4-3 victory to win the derby in front of the fans.

Over at Gocheok Sky Dome, the Lotte Giants finally ended their six-game losing streak by defeating the Heroes 4-2 on Friday. The Giants continue their streak by picking up another 6-3 victory against the Heroes, but on Sunday the Heroes made a strong comeback by picking up a big 8-1 victory to avoid the sweep.

In Suwon, the KT Wiz won their weekend against the top-ranked Dinos by picking up wins on Saturday and Sunday.

Starting Tuesday, the 10 KBO clubs will continue their season as the Bears host the Heroes at Jamsil Baseball Stadium in southern Seoul, while at Munhak in Incheon, the Wyverns host the Twins. The Giants will be heading back home to Sajik in Busan to host the top-ranked Dinos, while in Daegu, the Lions will be hosting the Eagles for their three-game series. Last but not least, over in Gwangju the Tigers will host the Wiz.

All five games are scheduled to start at 6:30 p.m., with fans expected to be permitted in the stadiums.