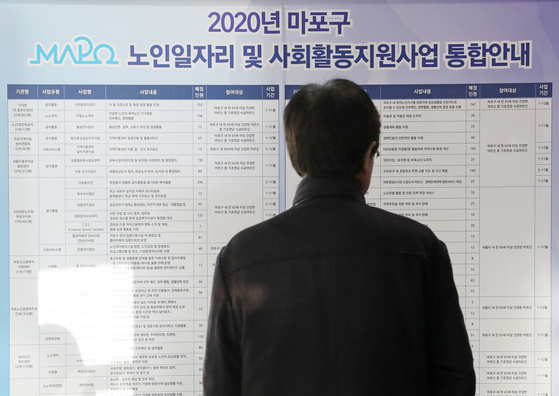 
Koreans 65 and above did surprisingly well during the pandemic in terms of employment, the age group being the only cohort in which employment increased in May. But when the definition of old is expanded to include those above 55, employment has dropped.

The biggest job losses for this group were in wholesale, retail, restaurants and lodging, which are areas that have been most vulnerable to the pandemic.

In May, 1.51 million were working in this industry, a 1.2 percent drop. Wholesale, retail, restaurant and lodging businesses employ 19.2 percent of the total.

Public services employ 37.1 percent of all people in this age group. Employment in public services for people 55 to 79 increased 2.93 percent to 2.93 million.

The aging population has been one of the biggest challenges faced by Korea .

One-third of the population aged 15 and above and economically active is considered elderly. There are nearly 14.3 million people aged between 55 and 79, 32 percent of all Koreans.

A recent report by Statistics Korea found that the lack of income was driving older Koreans to find jobs.

Only 47.1 percent of the elderly receive a pension. Although this is a 1.2 percentage-point increase on year, it indicates that the majority are compelled to work to sustain themselves.

Monthly pensions average 630,000 won ($526). Though this is 20,000 won more than a year ago, it falls far short of the minimum 1.5 million won a month recommended by the National Pension Research Institute.

Half of Covid-19 deaths in Korea reported this year