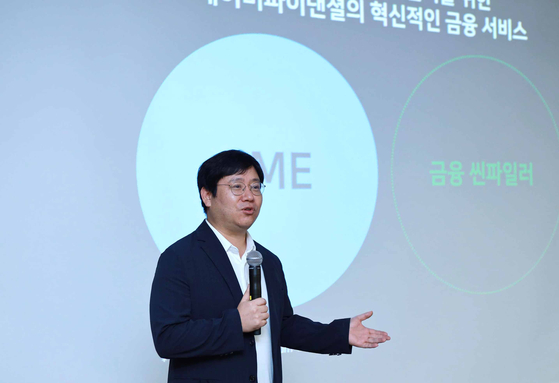 
Naver Financial, the financial arm of the portal giant, hopes to use data and artificial intelligence (AI) to help small-and-medium-sized enterprises (SME) and people who can't borrow from traditional financial institutions because they don't have a credit history.

“We want to add value to the finance world by providing services that can embrace people who lacked financial capability,” said Choi In-hyuk, CEO of Naver Financial, at a press conference Tuesday in Yeoksam, Gangnam District, southern Seoul.

“Among others, we want to focus services on SMEs that have been our greatest partners and the backbone of our growth over the years,” Choi added.

The company explained that many vendors on Naver Store, its online market, had a hard time raising funds for their businesses as 67 percent of them are between the ages of 20 to 39, and don't have the credit history needed to take out loans from banks.

Another barrier is that commercial banks calculate credit ratings based on traditional types of businesses, like brick-and-mortar stores, which many sellers on Naver do not have.

Naver Financial promises credit ratings based on data accumulated through its own e-commerce platform.

The system will allow vendors who have operated businesses for less than a year and meet a minimum sales requirement to take out loans from Mirae Asset Capital, its partner. Naver claims the system will become even more accurate as data accumulates.

Naver also said it will shorten payment dates from the average nine days to 5.4 days for its vendors. Previously, business owners could receive payment for their goods only after customers confirmed that they received them. For other online stores, this process can take up to 11 days.

Naver Financial is confident it can prevent improper payments from occurring, such as payments going to the wrong recipient or the wrong amount being paid, utilizing its newly developed fraud detection system.

“We will do our best to help SMEs focus solely on their business without having to worry about capital,” said Choi.