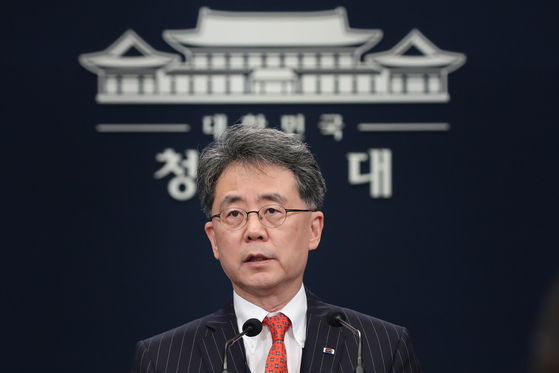 
South Korea announced Tuesday all restrictions on its use of solid-fuel rockets had been lifted, vastly increasing the country’s military and space potential.

Kim Hyun-chong, deputy national security adviser, said in a briefing at the Blue House that the United States agreed to revise missile guidelines for South Korea that eliminates restrictions on the use of solid propellants, a type of fuel often used for military applications.

“All private companies and research institutes in South Korea, and all individuals with Korean citizenship will now be allowed to research, develop, produce and possess various forms of space projectiles that use not only liquid-fuel but also solid and hybrid variants,” Kim said.

The South Korean military will gain the ability to conduct around-the-clock surveillance of the peninsula, known as “unblinking eye,” he added.

According to Kim, South Korea’s space program has been seriously hampered by the missile guidelines that limited its options to liquid-fuel rockets. Rockets using such propellants take a long time to refuel, and were often vulnerable to corrosion, which increased costs.

The original guidelines that restricted Seoul’s development of solid-fuel rockets were established in 1979, and were part of Washington’s desire to rein in its allies’ weapons development in order to prevent an arms race in Northeast Asia.

At the time, Seoul was banned from making any missiles with a range that exceeded 180 kilometers (112 miles).

Ironically, it was the advances North Korea made in its missile program that prompted the United States to gradually ease its restrictions on Seoul. Just years after Pyongyang launched its first long-range missile in 1998, South Korea’s Kim Dae-jung administration was given the permission to develop missiles with a maximum range of 300 kilometers and maximum mass of 500 kilograms (1,102 pounds).

In 2012, shortly after another long-range missile test by the North, the United States further extended the maximum range allowed for South Korean missiles to 800 kilometers, with warheads weighing up to one ton.

In 2017, after signs emerged that North Korea was in possession of an ICBM, all restrictions were lifted on maximum weights for South Korea’s missile warheads.

Now that it has been freed from any limits on the type of fuel to propel its rockets, South Korea’s missile and space programs will grow by leaps and bounds, analysts say.

Kim further said it was only “in due time” that Washington would lift all restrictions on maximum range, which currently stands as the only real constraint that prevents Seoul from making an ICBM.

The Hyunmoo-4, South Korea’s most advanced ballistic missile, has a maximum distance of 800 kilometers, enough to hit any target within North Korea.

According to one government source, Washington did not lift the range restriction this time due to concerns over Chinese retaliation.

Kim stressed the revision to the missile guidelines was the result of extensive behind-the-scenes negotiations between Seoul and Washington, which he spearheaded himself in visits to the United States last November and in February.

Freed from restrictions, Seoul may now be able to put numerous military satellites in place within the 2020s, the advisor added, allowing the country to possess a comprehensive network of intelligence on its security environment.