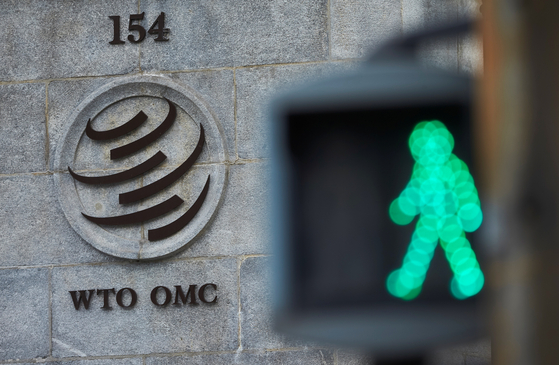 A logo is pictured in front of the World Trade Organization (WTO) in Geneva, Switzerland. [REUTERS]


Korea’s objections to Japan’s export restrictions are being taken up by the World Trade Organization (WTO), which decided to create an arbitration panel.

The WTO’s Dispute Settlement Body (DSB) held a meeting Wednesday in which the member countries agreed to set up the panel.

The decision came a month after the Korean government officially made a request.

On June 18, Seoul filed for the establishment of the panel through the Korean representative at the WTO in Geneva. The issue was raised during a DSB meeting on June 29.

Japan opposed the request on June 29 and on Wednesday.

However, under a WTO regulation, a panel is automatically approved unless all 164 member countries oppose.

The entire process, however, is expected to take time. Even the selection of three candidates for the panel will take roughly five to six months.

A final ruling on the dispute is expected to take between 10 to 13 months.

The process can be further extended if either one of the countries object to the panel’s final decision.

The Korean government said in a statement that it will argue that Japan’s export restrictions were arbitrary and discriminatory, which go against WTO rules.

In July 2019, Japan restricted exports of three key materials — hydrogen fluoride, fluorinated polyimide and photoresists — which are used in the manufacturing of high-quality semiconductors and displays, major Korean industries.

In late June, President Moon Jae-in stressed that Korea used Japan’s export restrictions as an opportunity to strengthen its own materials, parts and equipment industry.

“[Japan’s export restrictions] opened a pathway toward [building] a strong economy that no one can shake,” Moon said during a cabinet meeting in late June.

Addressing a shortage of urea (KOR)