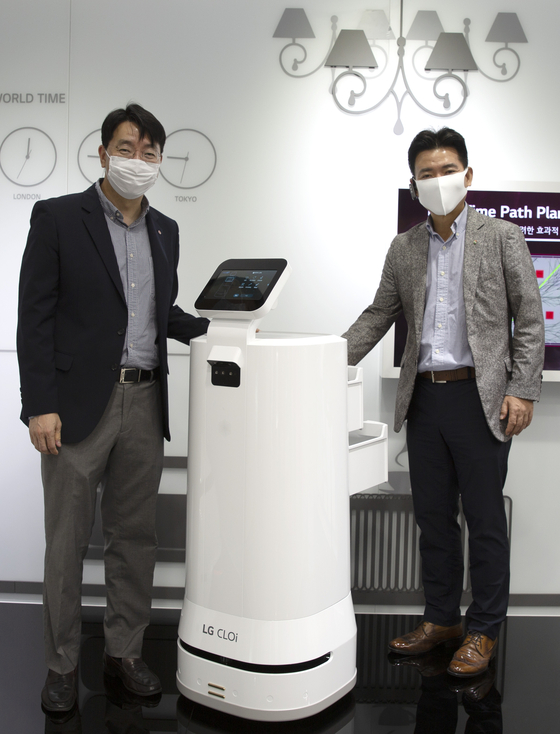 
GS Retail's digital transformation took to the air in June, with the test of drone delivery on Jeju Island, and now it is coming by land.

The company is developing a robot delivery service that will bring a wide range of products, such as sandwiches, drinks and dosirak (lunch boxes), to people working in office buildings.

Orders will be placed via Kakao Talk messaging app.

GS Retail and LG Electronics signed a memorandum of understanding at LG Science Park in Magok-dong, western Seoul, on Wednesday regarding development of the service. The event was attended by GS Retail Vice President Kim Seong-gi and Jung Weon-jin, vice president at LG Electronics.

The retailer said it plans to utilize the robots to deliver products inside buildings where a GS25 convenience store is located.

The robot has ultrasonic sensors and automatic driving technologies.

The 130-centimeter-tall (4.3-foot-tall) robot, which will be a version of the CLOi from LG Electronics, has three drawers and is able to carry up to 15 kilograms (33 pounds) of products. It also has a security system that prevents loss or robbery during delivery, according to GS Retail.

The person who places the order can unlock the robot drawer by typing a pin code when it arrives at the destination. The robot can get on and off elevators by itself.

The test service will begin next month at LG Science Park. The second test will be conducted from a GS25 store in Parnas Tower in Gangnam, southern Seoul, in October.

GS Retail’s goal is to adopt the service this year.

The exact details of the arrangement between the retailer and the electronics company has not yet been decided.

GS25's fried chicken to get a robot's touch