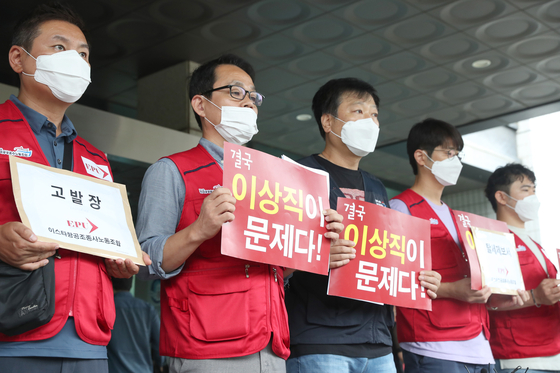 In front of the Seoul Southern District Court on Wednesday, Eastar Jet's pilot union blames Eastar Jet founder Lee Sang-jik for driving the airline to financial ruin. The pilot union reported Lee, also a Democratic Party lawmaker, to the prosecution on the same day over tax evasion and other alleged crimes. [YONHAP]


Eastar Holdings, which owns a 39.6 percent stake in Eastar Jet, is fully owned by Lee’s children — a daughter with 33.3 percent and a son with the remaining 66.7 percent.

According to the union, Lee reported false information about his family assets when he registered as a candidate for the 21st National Assembly. The union said in a statement that Lee “intentionally omitted assets owned by his wife and children.”

Lee is legally divorced, but his wife was spotted numerous times leaving the family house in Banpo, southern Seoul, according to the pilot union.

“If Lee is in a de facto marriage with his ex-wife, the spouse’s assets should also be reported, but they weren't,” the union said.

It also took aim at the finances of the family's company, saying that Eastar Holdings borrowed 8 billion won and received 9.2 billion won of private-equity funding. This “cannot be explained logically,” the union said, as Eastar Holdings “does not perform any business activities.” Its sales in 2018 was reported zero.

Eastar Holdings was established in 2015 with 30 million won in capital.

While the union did not explicitly connect Lee's allegedly hidden wealth and the fate of the airline, it did mention the need for cash to prevent the failure of Eastar Jet.

Lee must “resolve the [debt of] Eastar Jet, which is in danger of bankruptcy,” the union said.

On July 16, Jeju Air claimed it has the right to call off its acquisition of Eastar Jet, four months after the deal was signed. The bigger budget carrier said Eastar Jet did not meet the obligations agreed upon by Jeju Air and Eastar Holdings.

“Eastar Jet and lawmaker Lee have been focusing on shrinking the workforce in response to Jeju Air’s direction intended to minimize the damage from the acquisition process, using Covid-19 as an excuse,” said Park I-sam, a chairperson of Eastar Jet Pilot Union on Wednesday. Lee is responsible for “driving Eastar Jet to bankruptcy by halting the entire operation and not registering for the employment retention subsidy.”