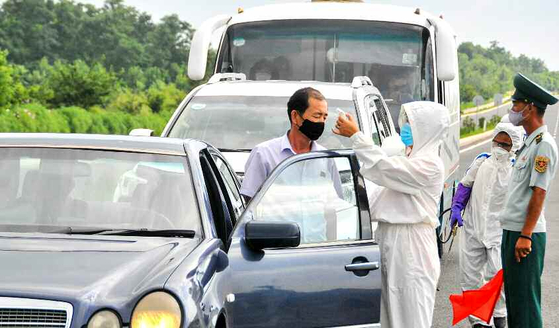 Quarantine officials perform a temperature check on a citizen in Pyongyang, according to a recent photograph from state media. [NEWS1]


North Korea placed hundreds of people in quarantine over coronavirus fears this month, according to the World Health Organization (WHO), suggesting the regime may be fighting a serious Covid-19 epidemic that could cripple its dilapidated health care system.

Edwin Salvador, the WHO representative to North Korea, wrote in an email to Radio Free Asia on Wednesday that 1,211 people in the North were tested for the virus as of July 16 — though all of them turned out negative.

A total of 696 North Korean nationals have been place under quarantine by the regime’s health authorities, most of them laborers who work in Nampo or areas on the North Korean border near the Chinese city of Dandong, Salvador reportedly stated.

“WHO continues to advocate to the Ministry of Public Health (MOPH) to increase surveillance in the provinces bordering China, in view of the recent increase in cases in China,” the report read.

The news outlet further reported that the North’s Foreign Ministry has imposed new health guidelines for foreign missions and humanitarian organizations working in the country, banning their workers from traveling to any location outside of Pyongyang and mandating the use of face masks while in the North Korean capital.

The measures follow an emergency meeting of the North Korean ruling Workers’ Party Political Bureau, in which leader Kim Jong-un upgraded the state's emergency anti-epidemic system to the maximum and issued a “top-class alert,” according to state media.

On Wednesday, the North’s official party newspaper, the Rodong Sinmun, said authorities had set up quarantine facilities and checkpoints at major interchanges, urban entryways and other dense urban areas.

Service units, including restaurants, shops and other public areas, are subject to disinfection and effective temperature checks, the report said, adding that such measures reflected a “social atmosphere encouraging an order of complete obedience to the emergency anti-epidemic headquarters.”

Citizens were also being ideologically educated to strictly adhere to sanitary guidelines, such as washing hands and using face masks, the report continued.

In addition to elevating a nationwide alert level regarding Covid-19, Kim also ordered a complete lockdown of the city of Kaesong last week, after a former defector to South Korea snuck back into the country, possibly carrying the virus with him.

Regime mouthpiece Korean Central News Agency said in a Sunday report that it was “uncertain” whether the person tested positive for the virus, but that examinations and quarantines were ordered for all Kaesong residents who came into contact with him. 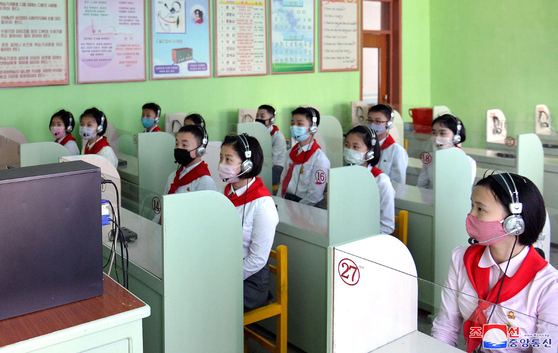 
Many of the emergency health measures outlined by Kim, like the blockade of an entire city, were unprecedented, suggesting the extent to which officials fear the devastation the virus could potentially wreak on the country’s ill-equipped health care system.

That inadequacy was why the regime was so quick to shut down its border with China and Russia early on in January, as well as force thousands of people, including foreigners, into weeks-long isolation.

For months afterwards, as its neighbors in China and South Korea were enduring some of the worst early outbreaks of the coronavirus, Pyongyang claimed success in preventing infections on its soil, though international experts doubted the assertions.