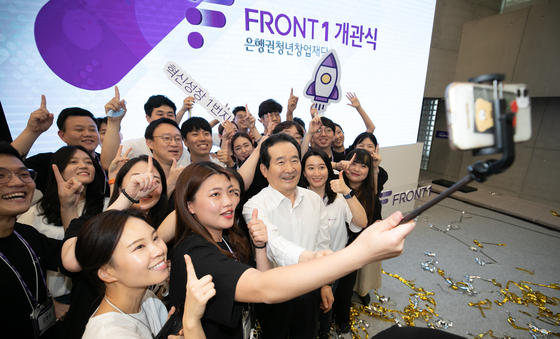 A total of 36,259 square meters (390,289 square feet) of the 20-story complex will host 120 start-ups paying 50,000 won ($42) per person a month. As a one-stop center for young entrepreneurs, the building will also hold offices of venture capital firms, accelerators, educational institutes and relevant organizations, like the Fintech Center Korea and the United Nations Industrial Development Organization.

The complex is designed to be a “start-up village” where entrepreneurs can get everything done without leaving the building. Once construction is fully completed by the year’s end, Front1 will have networking spaces, a cafeteria, a fitness club, a shower booth and a nursery.

“The goal of this complex is to organize an environment where entrepreneurs can solely focus on growing their business as Front1 will help with all the rest,” said Financial Services Commission (FSC) Chairman Eun Sung-soo.

D.Camp, a start-up support organization funded by 18 Korean banks, will be the center’s main operators. Five venture capital companies and accelerators will organize support programs and select which companies will receive support in Front1.

The idea of dedicating the building to start-up support came up in 2018 when the FSC announced the establishment of a large-scale incubator inside what had been the Seoul headquarters for the Korea Credit Guarantee Fund (KCGF). At the time, the building had been empty for years after the KCGF relocated to Daegu.

“Korea has a strong foundation of information technology and manufacturing. Despite the potential, one thing that we didn’t have was a well-made ecosystem for startups. Front1 will be a transition point in vitalizing entrepreneurship and ventures in the country,” said Prime Minster Chung Sye-kyun in congratulatory remarks during an opening ceremony, Thursday.

Through Front1, the FSC plans to offer support for more than 2,700 start-ups in the next five years, from which 18,000 jobs new jobs are expected.

That figure is based on the past employment records of start-ups that D.Camp has invested in or offered working space at its existing location in Gangnam, southern Seoul. Seventy-seven percent of start-ups selected by D.Camp manage to survive five years.

Series-A start-ups that received investments of less than 1 billion won so far are eligible to apply. Those selected to receive investment from D.Camp and the five venture capital firms and accelerators will be approved for space in the building. Ninety start-ups have been chosen so far. They can stay up to three years.