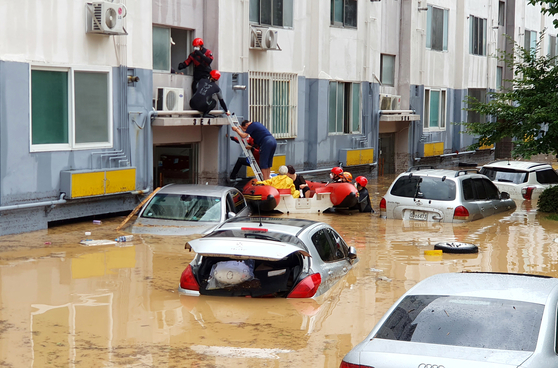 Rescue personnel evacuate residents from a flooded apartment complex in western Daejeon, which was hit by torrential rains on Thursday. [KIM SEONG-TAE]


An intense overnight downpour wreaked havoc in much of central and southern Korea Thursday, causing severe flooding in Daejeon that left one dead and around a hundred homes underwater.

According to the Korea Meteorological Administration (KMA), which lifted heavy rain alerts nationwide by Thursday afternoon, Daejeon experienced around 191.5 millimeters (7.5 inches) of rainfall, nearby Gyeryong and Nonsan, both in South Chungcheong, around 125 to 139 millimeters and Sejong around 111.5 millimeters — all record downpours for this year.

The neighboring province of North Chungcheong was also battered by torrential rain, with Boeun County receiving the heaviest precipitation of 220.7 millimeters. The southern parts of Gyeonggi also received precipitous rainfall, with Anseong receiving a total of 234 millimeters.

But the heaviest damage from Thursday’s rains was reported from Daejeon, Korea’s fifth most populous city, where 28 apartment complexes, 85 individual houses and 55 cars were flooded.

A man in his 50s was discovered dead at the entrance of his inundated apartment residence in the same district, apparently the victim of a heart attack.

Police believe he may have died of shock sometime around 3 a.m. early Thursday morning, but added an autopsy was needed to determine the exact cause of death.

Daejeon’s KMA said most of the rain that fell on the city overnight was concentrated in the hour between 4 and 5 a.m., when an estimated 80 millimeters fell.

In South Chungcheong, which surrounds the metropolitan areas of Daejeon and Sejong, local government officials said they received a total of 118 flood damage reports, which included falling trees and landslides. An additional 49 reports were received in Daejeon, and three in Sejong.

North Jeolla, just south of Chungcheong, was also heavily affected, having received around 100 millimeters on average overnight. Officials said around 130 hectares of farmland in Jinan, Muju, Gochang and Buan Counties were flooded, while lightning in Gunsan cut off electricity to several parts of the city for a brief period.

National and regional parks in the province were all closed off from public access due to flood damage.

According to the KMA, an additional 200 millimeters of rainfall is expected around Mount Jiri and the highlands in its vicinity, raising concerns of landslides in the area. A similar amount is expected in South Chungcheong.

The KMA further predicted South Gyeongsang, parts of which were  buffeted by rains on Thursday, would receive a maximum of 150 millimeters by Friday morning.

Seoul and the northern parts of Gyeonggi, which were relatively lightly affected by Thursday’s rain, were estimated to receive between five to 40 millimeters of additional rain by Friday morning.

But officials also added that once the rains abate, marking the effective end of the summer rainy season, a heat wave is likely to set in across the country throughout August until September.

Average temperatures throughout August are likely to range one or two degrees around the yearly average of 24.3 degrees Celsius (75.7 degrees Fahrenheit), the KMA said.