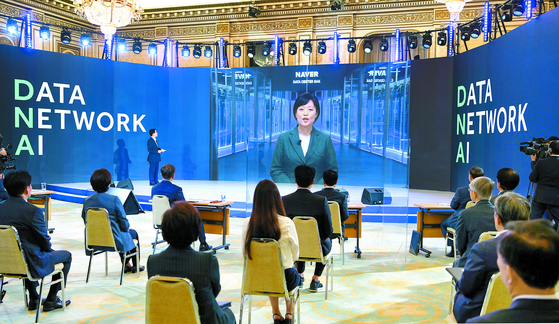 Naver CEO Han Seong-sook reports to President Moon Jae-in via a video call during a conference held at the Blue House. [JOONGANG ILBO]


Government ministries have been rolling out new plans to recruit and foster talent to contribute to the government's Digital New Deal initiative.

The plans, however, are already facing a backlash due to a lack of efficiency.

The Digital New Deal, one of the two main pillars of the government's Korean New Deal initiative, includes plans to invest 160 trillion won ($134 billion) by 2025 in digital sectors such as data, networking and artificial intelligence (AI), in order to the boost economy in the aftermath of the coronavirus pandemic.

Following the announcement on July 14, the Labor Ministry and the Science Ministry on July 20 announced plans to foster a talent pool of 100,000 people in the AI and software sectors. Their plans also included establishing more graduate schools for AI studies and expanding regional education institutes for AI education.

But the ministries did not detail the budget or the expected outcome from establishing such institutions.

Competition among ministries to be seen to be contributing to the initiative has spread throughout the government.


A day after the Labor and Science Ministries laid out their grand plans to foster a talent pool, the Interior Ministry and the National Information Society Agency (NIA) announced plans to hire 8,000 "data interns." It said they will contribute to the “data dam” project, which lies at the heart of the Digital New Deal.


With reference to the Hoover Dam, President Moon said one of the goals of the Korean New Deal initiative is to build a "data dam" that will maximize the use of data, the foundation of a future digital economy.

It is rare for the government to announce such large-scale recruitment, even for internship positions.

These interns will work at local government and public institutions nationwide for three months during the latter half of the year. They will be paid 1.8 million won per month, so over 50 billion won will go toward data dam personnel. This value is projected to increase, since there will be an additional two-week educational program on data for the interns.

Despite the large fund created, what these interns will end up doing is expected to be simple tasks like punching data into Microsoft Excel, rather than something more creative and value-making.

“The mechanical data work that is like a utility job does not directly serve the purpose of fostering talent in the AI and data sectors,” said Lee Seong-yeob, a professor at the Korea University Graduate School of Management of Technology. “The recruited individuals with interest and talent in data must be trained so that they can use their abilities after the internship.”

NIA explained in a recent phone interview with JoongAng Ilbo that the intern program is aimed at offering experiences which will help them choose their data-related careers in the future, rather than fostering professionals in certain fields.

There are also concerns that the current government is leaning more towards immediate success stories rather than substantial long-term growth.

The Moon administration has announced plans to foster talent in the AI and software sectors six times since 2017. In total, the government has promised to create jobs for 440,000 people.

“The talent pool that can thrive in innovative industries like AI cannot be developed within the span of a short-term project,” said Moon Song-chun, an honorary professor at KAIST. “There needs to be an authority that can oversee the grand plan of fostering talent in the long term, instead of individual ministries.”