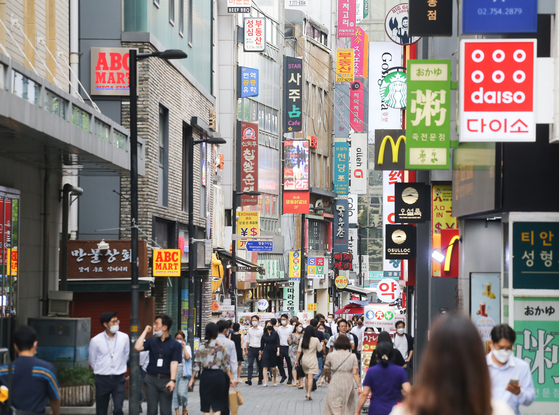 People crowd the commercial district in Myeong-dong in central Seoul on Friday. Myeong-dong, one of the most popular tourist destinations in Seoul, suffered heavily earlier this year after the coronavirus outbreak spread and tourists entering Korea were restricted. However, Statistics Korea's latest report has shown a recovery including in spending thanks to the control over the the virus. [YONHAP]


June was a good month for the economy, with a number of indicators suggesting a turnaround.

When compared to the previous month, all three increased, the first on-month increase in six months.

When compared to the previous month, industrial output grew 4.2 percent, the first positive reading since January.

Mining and manufacturing output did dip half a percent, but that's considerably better than the 9.8 percent drop in May.

Month-on-month, mining and manufacturing output was up 7.2 percent, a sharp contrast to May’s 7 percent drop.

Semiconductor production continued to be the driving force behind Korea’s improved manufacturing output. Year-on-year it was up 23.9 percent on strong dynamic random-access memory (DRAM) demand related to the increasing number of people working and shopping at home.

Automobile output fell 13.4 percent, though it was up on month. When compared to the previous month, automobile output rose 22.9 percent, whereas the semiconductor output was up 3.8 percent.

Improvement was also reported in the service sector, though arts, sports and leisure continued to suffer as social distancing guidelines limited these activities.

Service industry output year-on-year fell 0.1 percent in June, which is a turnaround from a 4 percent drop in May. It has been in decline for three consecutive months. Month-on-month it grew 2.2 percent.

Government emergency relief grants distributed to every household in the country to help consumers contributed to the month-on-month improvement in services.

Consumer spending in June was up 6.3 percent on year. Spending on durable goods rose 29.2 percent.

The statistics agency said that changes in tax policies related to auto purchases may have been responsible for some of the slowdown. While the government extended a cut in the consumption tax on car purchases through the end of the year, it reduced the size of the cut.

Corporate investment was particularly strong in June, with the figure up 13 percent on year. That compares with 3.4 percent in May.

On month, it grew 5.4 percent in June, compared with a 6.6 percent decline in May.

“When compared to the past global crises, including the IMF crisis and the global financial crisis, Covid-19 has a more direct and had a larger impact on the economy,” said Ahn Hyung-joon, Statistics Korea’s deputy director-general on short-term economic statistics. “However, it turns out recovery is fast.”

The deputy director said services have been helped by the control of the coronavirus outbreak.

While the number of daily confirmed cases still remain in the double-digits, domestic-community spread has been stable. Most of the cases are related to returning Koreans.

"The manufacturing industrial production, which declined sharply in April and May, bounced back as exports recovered," Ahn said.

President Moon Jae-in earlier this week said he expects the economy to rebound in the third quarter as a result of efforts by the government and the private sector.

“System semiconductors, OLEDs and mobile phones, which are our strong suits, have turned to positive growth in terms of exports, and environmentally friendly future vehicle exports trending up,” Moon said.

The Trade Ministry will be announcing July’s export on Saturday.

Korea’s latest favorable report comes as the United States announced its worst GDP growth, with the figure declining 32.9 percent in the second quarter.