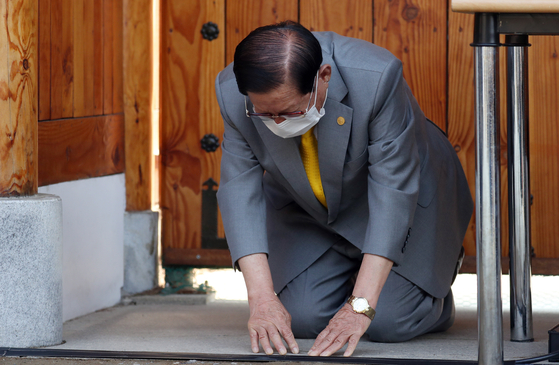 Shincheonji Church founder and leader Lee Man-hee, who was placed in detention on Saturday, kneels in a gesture of apology during a press conference on March 2. [YONHAP]


Lee Man-hee, the self-proclaimed messiah who leads the controversial Shincheonji Church of Jesus, was detained Sunday on allegations that he obstructed the Korean government’s efforts to contain the novel coronavirus outbreak in February.

The Suwon Central District Court on Saturday afternoon ruled that the 88-year-old preacher had attempted to tamper with evidence relevant to an investigation into the Shincheonji Church of Jesus’ responsibility in a massive spike of Covid-19 cases in Daegu and North Gyeongsang earlier this year.

Lee, who is regarded as immortal and infallible by his followers, is accused of orchestrating a systematic effort by the church to hamper attempts by health officials to identify and trace adherents who contracted the virus.

Korea became the subject of international headlines after its number of infections soared from just 30 in mid-February to over 8,000 one month later. The inflection point was Feb. 18, when the first patient from the Shincheonji Church in Daegu tested positive after attending large church gatherings which proved to be the cause of mass contagion.

According to the Korea Centers for Disease Control and Prevention (KCDC), more than three out of 10 people infected with Covid-19 in Korea over the past six months had links to the Shincheonji cluster. For a brief time, the cluster caused Korea to have the second-highest number of coronavirus cases in the world, after China.

To determine just how many people were at risk while conducting contract tracing amid the outbreak, local governments in February sought complete membership records from the church.

The sect belatedly complied by submitting relevant documents, but prosecutors believe Lee and other church leaders deliberately underreported the number of adherents and participants in mass gatherings, possibly out of the fear some of the sect’s unsavory religious practices could be exposed.

The church is accused of concealing records detailing which members attended religious services along with Patient No. 31 — the first confirmed coronavirus patient associated with the sect — as well as the domestic activities of church members from Wuhan, China, the origin and initial epicenter of the coronavirus.

Separately, Lee is also accused of having embezzled around 5.6 billion won ($4.7 million) of the sect’s funds meant for construction of the church’s “Palace of Peace” in Gapyeong, Gyeonggi. The palace is a villa the church uses as a training center, and also serves as one of Lee’s country residences.

Saturday’s court decision stunned the Shincheonji Church, which responded with a statement stressing that Lee’s pretrial detention does not mean his is guilty, and that it would fight for his innocence in a court of law.

The sect “actively cooperated” with health authorities with regards to the epidemic and merely raised concerns with the government’s “excessive” requests that it divulge personal information, the church claimed in a press release.

Seven other ranking church figures have been indicted on similar charges, and will likely stand trial along with their elderly leader.

This was the second time Lee has been jailed. In 1980 he was convicted on a libel charge for smearing a religious leader under whom he had served.

Mainstream Christian sects and organizations in Korea consider the Shincheonji Church to be a cult, arguing that it employs exploitative practices to expand its ranks. The sect is believed to have around 300,000 adherents, but analysts say many have likely departed after the group gained notoriety owing to its role in the coronavirus outbreak.

There were, however, many others who welcomed the court’s decision to detain Lee. A civic group representing victims of Shincheonji’s religious practices said the detention would deliver “great relief” to the parents whose children have fallen victim to the sect’s “religious fraud,” adding the group was preparing a class-action lawsuit against the church for the manipulative means by which it has spread its beliefs.