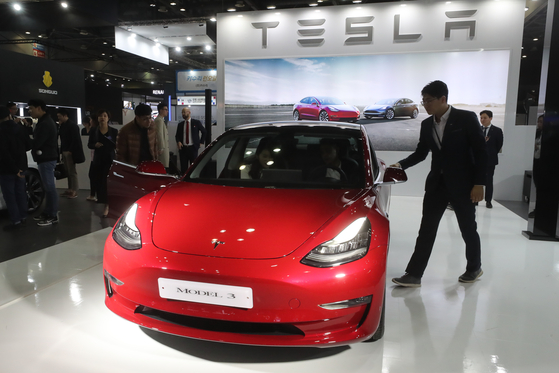 Tesla's Model3 on display at the Seoul Motor Show held at Kintex in March 2019 in Gyeonggi. [YONHAP]


Korea’s future car dream is under threat as foreign makers dominate the market that is supposed to make it all possible.

In the first half of the year, sales of fully electric sedans from domestic carmakers dropped by 43.1 percent on-year, while imported electric sedan sales jumped by 564.1 percent.

Overall, sales of full electric sedans in Korea hit 16,359 in the first half, a 2.7 percent year-on-year drop, according to Korea Automobile Manufacturers Association data. 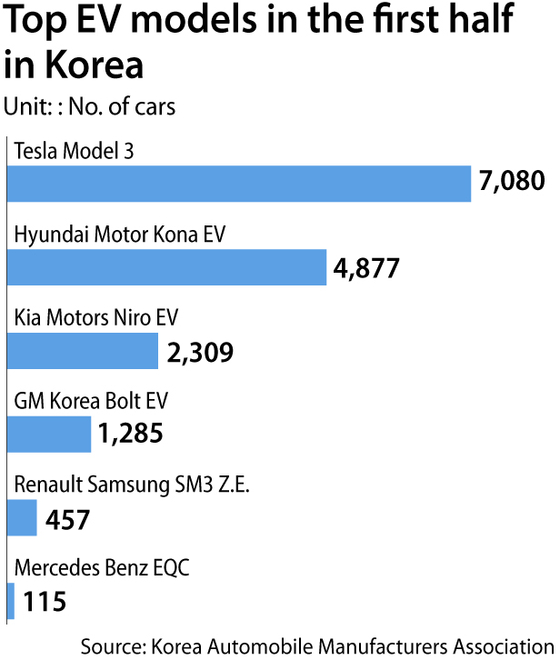 
Foreign electric vehicle (EV) makers receive the same subsidies as domestic EVs. The calculation is based on the driving range of the vehicle.

Tesla’s Model 3 base model is priced at 53.7 million won and qualified for nearly 8 million won from the central government as an incentive. When the municipal government subsidy is added, the price tag can go down to a 30 million won level, same as EV models from Hyundai Motor and Kia Motors.

“When the price, the biggest hurdle to buying an imported car, is similar with models from domestic carmakers, Korean consumers will highly likely to go for an imported model, especially when it is a Tesla,” said Kim Pil-soo, automotive engineering professor, Daelim University.

The subsidy is similar even for more luxurious models, such as the Tesla Model S or Mercedes-Benz’s EQC, both of which cost more than 100 million won without the subsidy. Although they are still expensive, a favorable environment to sell expensive EVs in Korea could continue to put a threat on value-for-money models made by domestic carmakers.

“An undifferentiated and big subsidy plan for EV purchases makes Korea a favorable market for EV manufacturers because a lot of big auto markets have already implemented subsidy scheme that gives a different amount of incentives depending on the model,” Kim added.

In the United States, for example, some states put a cap on subsidies.


Domestic car manufacturers are likely to be more challenged in the latter half of the year as their strongest selling point -  a low price - will no longer be an advantage. Affordable imported EVs are slated to hit the Korean market.

The e-208, which was selected Car of the Year in Europe, costs from 41 million won and is eligible for a 6.5 million won central government subsidy. When added to municipal government incentives, the imported model ends up in the 20-million-won range. Both e-208 and e-2008 can go 244 kilometers per charge.

Renault Samsung Motors will bring the Zoe hatchback EV to Korea in the latter half as well. The car’s driving range is 309 kilometer per charge. Its price hasn’t been confirmed, but considering its European price starts at around 32.5 million won, it is highly likely for it to be sold in the 20-million-won range after subsidies.

In luxury segment, Porsche is expected to bring the Taycan, its first full EV model, to Korea in the latter half. The Taycan 4S will have a 407 kilometer range and will be priced starting at 145.6 million won. Audi already brought the e-tron EV to Korea last month. The car, which can go 307 kilometers per charge, starts at 117 million won.

“This year, foreign carmakers will take more share in the EV market,” said Kim. “From next year, however, when Hyundai Motor Group releases new models under its EV-dedicated E-GMP platform, it could be a completely different story.”