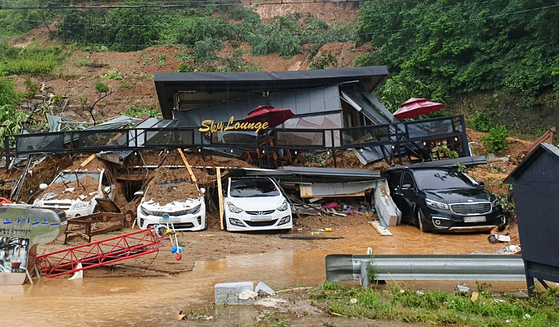 This photo, provided by authorities in northern Gyeonggi, shows holiday lodgings engulfed by a landslide in Gapyeong, Gyeonggi, on Monday. Three people were reportedly killed in the landslide. [NEWS1]


As Korea tries to dry off from the weekend’s massive downpours, the country’s meteorologists warned that more rain is expected as one of the longest wet seasons on record shows no sign of stopping.

According to the Korea Meteorological Administration (KMA), which called off weekend heavy rain alerts for most of central Korea by Monday morning, around 50 to 80 millimeters (2 to 3 inches) of additional precipitation was expected across the capital, Gyeonggi and western Gangwon by the end of the day.

Until Tuesday, most areas in central Korea will receive a total of 100 to 200 millimeters, with some areas receiving up to 300 millimeters, the KMA said. Until Wednesday the total amount of rainfall was expected to amount to 500 millimeters at maximum.

“Long and narrow strips of rain clouds stretching from east to west are on the move, making it likely rain will continue until Wednesday, and central Korea should remain prepared,” said a KMA spokesperson.

“North Korea has also been hit by heavy rains, so people should be careful of safety hazards near riverbeds north of Gyeonggi, like the Imjin and Hantan rivers.”

The weekend saw some of the heaviest downpours of this year, with most areas in southern Gyeonggi and North Chungcheong being hit by more than 200 millimeters of rainfall in total. A record for the year was set in Anseong, Gyeonggi, which measured 321.5 millimeters over the weekend.

This led to a series of disasters across rural areas in particular, where floods and landslides led to at least six deaths over the weekend. Several others were reported missing amid the chaos.

On Monday, a sudden mudslide caused by erosion from heavy rains near a semiconductor factory in Pyeongtaek, Gyeonggi, buried four workers. They were all rescued by firefighters, but three died from their injuries while one is in serious condition, according to fire authorities.

A similar accident occurred the same day in Gapyeong in northern Gyeonggi, where a landslide caused a rental cottage to collapse in on itself, trapping and killing two women and a child inside. The bodies of all three were recovered Monday afternoon.

Across central Korea, around 2,800 hectares of farmland were reported damaged, and a total of 3,410 damage reports received as a result of the rain, according to the Ministry of Interior and Safety on Monday. A total of 818 people were displaced, of which 201 have returned home.

Seoul received around 110.9 millimeters of rain from Saturday to Monday — comparatively less than other parts of the country — but the downpour caused flooding in several parts of the city, while water levels of the Han River rose significantly.

Due to a risk of flooding near Yeoui Bridge in western Seoul, the Seoul Metropolitan Police Agency was forced to shut down the Olympic Expressway between the Dangsan and Hangang Railway Bridges, causing heavy traffic congestion in the southern part of the city.

Many of the parks along the banks of the Han River were inundated, as were areas near tributaries to the Han River, like the Joongrangcheon.

The torrential rains that battered central Korea, expected to be the final wave of precipitation in this year’s unusually long rainy season, were further augmented by Typhoon Hagupit, which has been slowly making its way northwards after arising in waters around Okinawa, Japan, on Saturday.

The storm was expected to make landfall in China on Tuesday morning, but it created significant water vapor that migrated northwards towards the Korean Peninsula, worsening the rainstorms here, said the KMA. 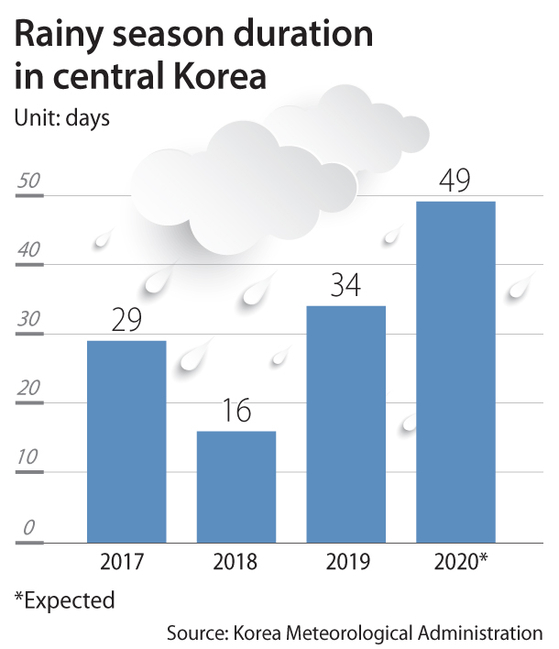 Korea’s monsoon season — a period of heavy rain and soaring temperatures — typically lasts for a month or less each summer. This year broke records as Jeju Island experienced its longest-ever summer monsoon, which lasted 49 days.

If rains in central Korea persist after Aug. 10, as was predicted by the oft-wrong KMA last week, it will become the mainland's longest rainy season on record, also at 49 days. The longest monsoon on record was set in 2013, when the wet season persisted for 49 days. Usually the average is around 15.8 days, according to the KMA.


Meteorologists said this year’s rainy season was especially long due to a strong collision between cold winds from the north and warm winds from the south, exacerbated by the water vapor created by the typhoon.

The dramatic rains prompted President Moon Jae-in to cancel his scheduled summer holiday to his residence in Yangsan, South Gyeongsang. Moon’s vacation, which was called off last year as well due to diplomatic friction with Japan, had originally been advised by his aides to boost public confidence in domestic tourism amid the Covid-19 outbreak. 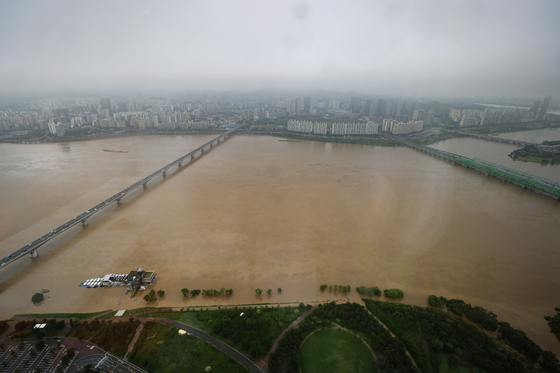 The Han River, bisecting Seoul, seen from the 63 Building in Yeouido, western Seoul. The city government closed off a section of a major expressway in the city after heavy rains led to a rise in the river's water level. [YONHAP]