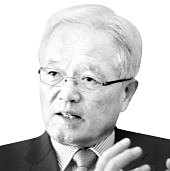 Chung Ui-hwa
The author is a former speaker of the National Assembly.


More people are doubting the true nature of the Moon Jae-in administration. Since the Cho Kuk scandal, justice and fairness in our society were shaken. Now, the Constitution, the basis and the fundamental principle of the Republic of Korea, is being threatened.

There are some crucial mechanisms to safeguard a liberal democracy. Checks and balances of the legislature, judiciary and administration are examples of this. The Board of Audit and Inspection (BAI), established under Article 97 of the Constitution, also plays an important role.

And yet, the ruling party is attacking the head of the BAI and demanding his resignation, because it is not pleased with the board’s audit conclusion about the government’s nuclear phase-out policy. It is pressuring the BAI to produce only a favorable audit conclusion. Although they are lawmakers, the representatives of the people, their behaviors are extremely lamentable.

In Korea, society maintains justice and fairness and realizes the rule of law through the criminal justice system operated by the politically neutral prosecution and court. The ruling party and the administration had once praised Prosecutor General Yoon Seok-youl, but they are now making a fuss because Yoon is trying to investigate key members of the administration.

They are now using all possible means to disarm the prosecutor general who is simply trying to investigate suspicions. Justice Minister Choo Mi-ae’s words and behavior in particular are shocking, since she is a veteran lawmaker who once headed the ruling party.

The Judicial Affairs and Prosecution Reform Committee, which pledged to reform the prosecution, is also acting outrageously. It proposed to give absolute powers to the justice minister, a member of the administration, while taking away key powers from the prosecutor general, who is supposed to have an independent authority.

The administration is also ignoring the recommendation of the investigation review committee of the prosecution, created to oversee the prosecutors from the perspective of the ordinary people. It recently presented an opinion that an investigation into Han Dong-hoon, a senior prosecutor and a key associate of Prosecutor General Yoon, must be stopped and he must not be indicted, although the administration alleged that he had colluded with a reporter to blackmail a convicted businessman to obtain incriminating information against a liberal pundit.

It was probably not an outcome that the administration expected from the committee. The administration seems to have no hesitation to frame a senior prosecutor if it wants to, so it is frightening just to imagine what it can do to powerless ordinary people.

Our democracy is a parliamentary democracy. Whether we like it or not, the National Assembly is the speaker of the people and their final bastion. Unfortunately, it is being destroyed.

Lawmakers are carrying out various destructive actions at the standing committees and plenary sessions as if they are conducting a military operation. The ruling party lawmakers used to be student activists against authoritarian regimes, but ironically, they are killing parliamentary democracy.

A bill approved by a standing committee is reviewed again at the Legislation and Judiciary Committee before going into the plenary session for a voting. After a bill is introduced in a standing committee, lawmakers also need to listen to the opinions of the National Assembly’s experts and outside experts as well as those affected by the bill. All those are necessary steps. For a bill to be voted on, it naturally requires two to three months.

And yet, such steps are completely ignored. In the recent general elections, the ruling party won the supermajority, controlling 176 seats alone in the National Assembly. The people, however, never ordered them to run the legislature recklessly by using the majority as their weapon. Democratic procedures disappeared, and only high-handed violence remained. The legislature became a servant of the administration.

If you don’t learn a lesson from history, you will have no future. The ruling party must look back on itself and start going toward a righteous path. If it doesn’t, the ruling party and the administration will soon face consequences for their anti-democratic acts. We have already had such experiences in the past. They must remember that the voice of the people is the voice of God.