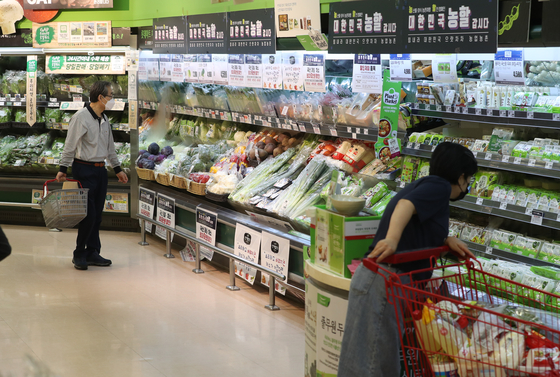 The fresh vegetable section at a major discount mart in Seoul on Tuesday. Vegetable prices were up more than 16 percent in July, contributing to raising inflation. The trend is expected to continue in August due to the heavy rain. [YONHAP]


Inflation is back, led by Napa cabbages and onions, and that's the latest piece of good news suggesting that a rebound could come in the third quarter.

According to Statistics Korea on Tuesday, consumer prices were up 0.3 percent in July on-year. That comes after no growth in June and a 0.3 percent fall in May.

The most recent increase was in April, when consumer prices rose 0.1 percent on-year.

The biggest contributor to the price increases in July was fresh produce inflation, while low energy prices help temper the rise. The recent increase in jeonse prices also contributed to inflation.

In the first three months of the year, the rise was above 1 percent. The May fall was only the second deflation reading since the statistic was first compiled in 1965. The first such reading was in September 2019, when it hit minus 0.40 percent, an all-time low.

Vegetable prices were up largely due to heavy rainfall last month. With the ongoing precipitation, the increases are expected to continue, the statistics agency said.

“Considering the consumer prices in July have been affected by the rainfall, the current trend is likely to be continued in August,” said Ahn Hyung-joon, head of the statistic agency’s short-term economic statistics department.

“Jeonse prices, which were minus last year, have gone up in the last three months,” Ahn said. “Even monthly rent has been showing a similar trend, rising for two consecutive months.”

Utility bills, including those for electricity, water and gas, were down 4.5 percent.

Social distancing is believed to have contributed to rising prices.

The latest inflation report followed other favorable economic news, including an improvement in industrial output, consumer spending and investment in June and a slowing in the rate of export declines in July.