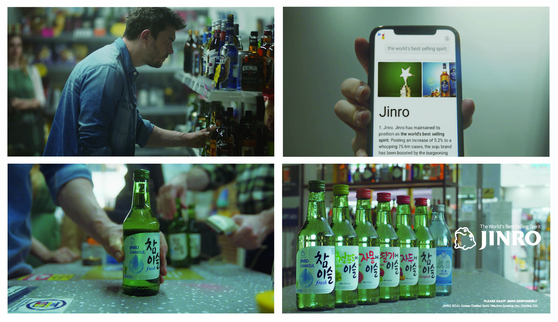 Using the slogan, "The world's best-selling spirit," Jinro will air two commercials on NBC Sports and ESPN for New York and Los Angeles audiences for the next five months. Its target viewers are customers who watch sports in local bars.

Hite Jinro exports 25 products to more than 80 countries around the world, including China, Japan and the United States. The company has been trying to penetrate the U.S. market since 2016, partnering with local distributors and the LA Dodgers baseball team.

Hite Jinro is the No.1 player in the local soju industry, with more than a 60 percent market share. The North American market for soju could reach $361.1 million by 2026, according to Verified Market Research.

Jinro soju US chamisul Jinro is back korean spirit

Hite Jinro to start exporting Jinro is Back soju