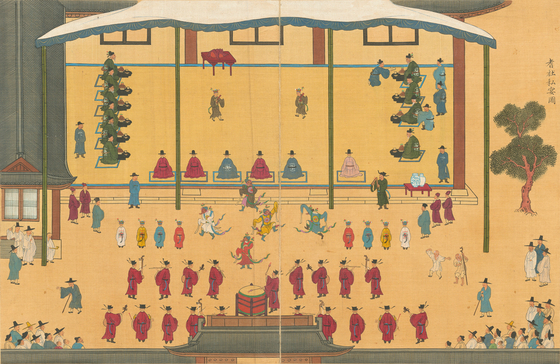 A painting part of National Treasure No. 325, titled the Album of Paintings of the Gathering of Elders, is among 83 national treasures showcased at the National Museum of Korea in central Seoul through Sept. 27. [NATIONAL MUSEUM OF KOREA]


The most minute details about rituals, processions, funerals and celebrations were all depicted in the royal paintings of the Joseon Dynasty (1392-1910). One such detail uncovered by scholars is that the court would hire special dancers from time to time whose moves were believed to ward off the evil spirits of an epidemic.

“Here in this painting, which is part of National Treasure No. 325, titled the Album of Paintings of the Gathering of Elders, you can see at the center of the painting five hired dancers in their special outfits in the midst of their ritualistic dance,” said Kang Kyung-nam, curator at the National Museum of Korea in central Seoul on July 20. “This painting, done during the reign of King Sukjong [1661-1720] shows that Korea was no stranger to viral outbreaks over the centuries.” 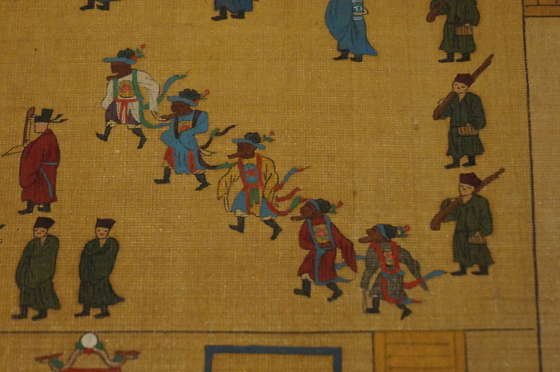 A close-up photo of a painting part of of National Treasure No. 325 shows ritual dancers hired at a gathering of court officials during the Joseon Dynasty. [ESTHER CHUNG]


After being closed for weeks due to the uptick in Covid-19 cases in Korea, the National Museum of Korea is back in business and hosting the biggest exhibition ever on national treasures.

“We gathered 83 national treasures that were being managed by 34 different organizations into one place for the special exhibition, the largest yet on national treasures of Korea,” said Bae Gi-dong, director of the museum, at the opening ceremony hosted at the museum on July 20. “The 83 treasures are those that were newly approved from 2017 to 2019.”

The exhibition is being hosted together with The Cultural Heritage Administration (CHA), the government authority in Korea on heritage and treasures.

“You are observing 5,000 years of Korean DNA when you examine these treasures,” said Chung Jae-suk, head of CHA, at the opening ceremony. “Be sure to come by not just once, but twice, because the treasures are rotated in and out during the exhibition.”

The exhibition is located on the first floor of the special gallery. There is no entrance fee. In order to practice social distancing, only 200 people will be allowed in at a time and reservations can be made online at the museum’s website. The exhibition is open through Sept. 27.

Records
The first national treasure to welcome visitors is the "Samguk Sagi", or the History of the Three Kingdoms. The records were made at the order of King Injong (1109-1146) of the Goryeo Dynasty (918-1392), and are the first history books published by the country.

Books of "Joseon Wangjo Sillok," or Annals of the Joseon Dynasty, including a book made specially to be viewed by only kings, are also included in the exhibition.

The books are followed by National Treasure No. 324, Royal Certificate of Meritorious Subject Issued to Yi Je, which is the royal certificate issued from King Taejo (1335-1408), founder of Joseon Dynasty, to his third son-in-law, praising his good work. It is the only surviving royal certificate of the dynasty. 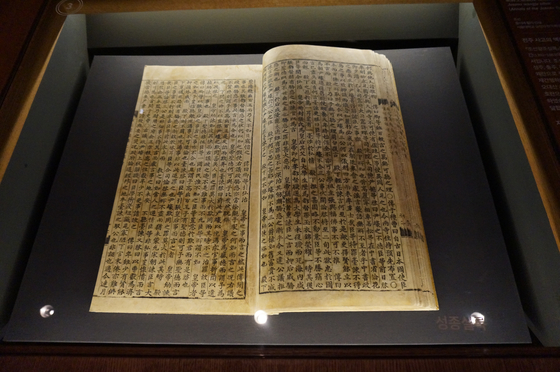 A book of Annals of Joseon Dynasty, National Treasure No. 151, exhibited at the National Museum of Korea in central Seoul. [ESTHER CHUNG]


The exhibition is divided into three sections. In the transition room from the first section to the second are several vases — the first examples of the popular Goryeo celadon pottery.

“You’d think that they would carry the bluish-tint-on-white kind of color schemes,” Kang, the curator, said. “But this jar with a light brown glaze is one of the earliest examples of Goryeo celadon pottery, dating back to the year 993. It is National Treasure No. 326 — Celadon Jar with Inscription of ‘the Fourth Sunhwa Year.’" 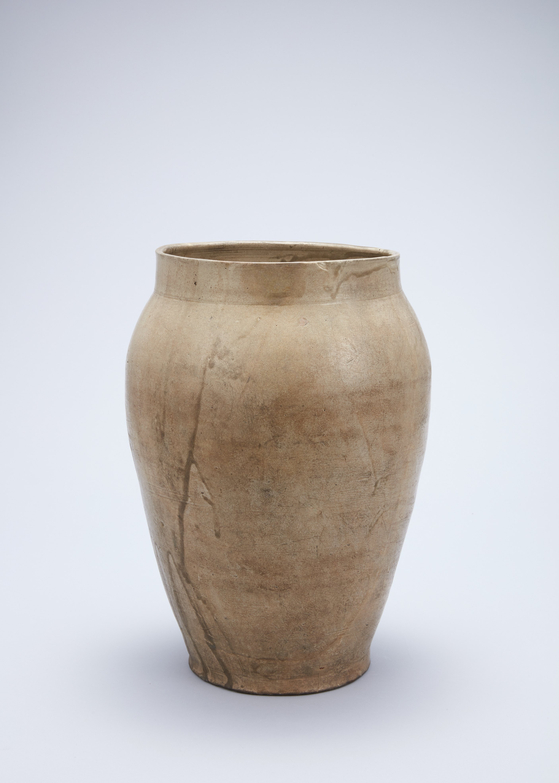 National Treasure No. 326, Celadon Jar with Inscription of "the Fourth Sunhwa Year."[NATIONAL MUSEUM OF KOREA]


The bluish tint, a more well-known signature characteristic of Goryeo celadon, can be seen from the 11th century, as seen in a vase located next to the treasure.

Stepping into the canvas
The second section of the exhibition holds paintings, some that measure as long as 26 feet.

In an elongated room are two paintings, side by side: treasure No. 1986, Chokjandogwon (The Rugged Road to Shu) by Sim Sa-jeong and treasure No. 2029, Gangsan mujindo (Endless Mountains and Rivers) by Yi Inmun.

The two paintings are classified as treasures — a level lower than national treasures.

National treasures are deemed “of great importance for humanity and without parallel in human history” while treasures are defined as “important cultural heritage of Korea,” according to the Cultural Heritage Protection Act.

There is no mistaking where the paintings are located in the exhibition. The room which houses the glass cases in which the two 26-foot-long paintings are encased has been decorated with wallpaper that is a recreation of the paintings themselves. 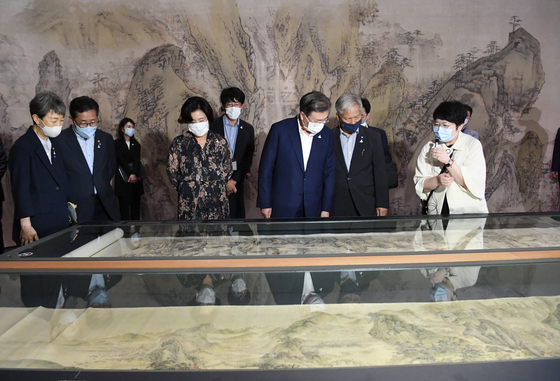 President Moon Jae-in, right, and his wife looking at treasure No. 1986, Chokjandogwon (The Rugged Road to Shu) by Sim Sa-jeong and treasure No. 2029, Gangsan mujindo (Endless Mountains and Rivers) by Yi Inmun at the special exhibition on treasures at the National Museum of Korea in central Seoul on July 30. [NATIONAL MUSEUM OF KOREA]


The impact is heightened with the sounds of birds chirping and water flowing playing in the background.

“The Chokjandogwon was painted by Sim in 1768, just a year before he died, and depicts the treacherous journey from present day Xian to Sichuan in China,” Kang said. “It is extraordinary to see Sim’s work side by side with Yi, because Yi studied under Sim. The two paintings have never been exhibited next to each other before.”

There is one glaring difference between the works of the teacher and the apprentice.

“Look closely at Yi’s work and you will be able to spot people — figures of stunning details going about their social and economic activities,” Kang said.

Sim's painting is devoid of any figures.

Other paintings exhibited include treasure No. 1951, Pungak Naesan Chongnamdo (General View of Inner Geumgangsan Mountain) by Jeong Seon, where details of locations on the mountain come alive upon closer inspection. 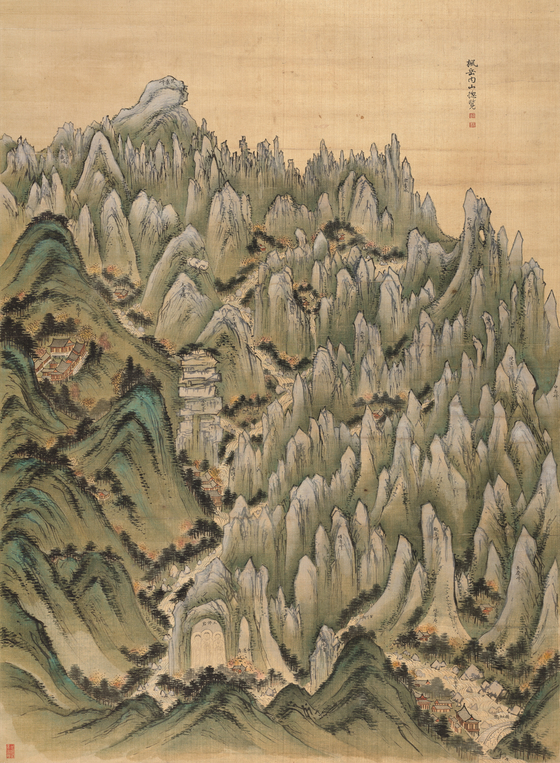 
Kansong Art and Culture Foundation, run by the descendants of the famous collector Jeon Hyeong-pil (1906-62) whose pen name was Kansong, will be showcasing 22 treasures in its possession at the exhibition.

They include the famous Masang cheongaengdo (Listening on Horseback to a Nightingale Singing) by Kim Hong-do, treasure No. 1970, and Miindo (Portrait of a Beauty) by Sin Yun-bok, treasure No. 1973.

Miindo (Portrait of a Beauty) by Sin Yun-bok, treasure No. 1973. [NATIONAL MUSEUM OF KOREA]


The Kansong treasures will be divided into three groups and each group will be exhibited for three weeks before being rotated.

Buddhist roots
Nearly half of Korea's treasures are related to Buddhism.

“Among national treasures, some 40 percent are related to religion,” Kang said.

The third section of the exhibition which showcases these treasures begins with National Treasure No. 327, Reliquaries Excavated from Wangheungsa Temple Site, Buyeo, the oldest reliquary, or container for relics, of Korea.

“These vessels were enshrined for the deceased son of King Wideok of Baekje Kingdom [18 B.C.-A.D. 660],” Kang said. “Back then, the practice of making the reliquaries and enshrining them with the deceased was adhered to religion. The vessels’ details represent well the artistic excellence of the period.” 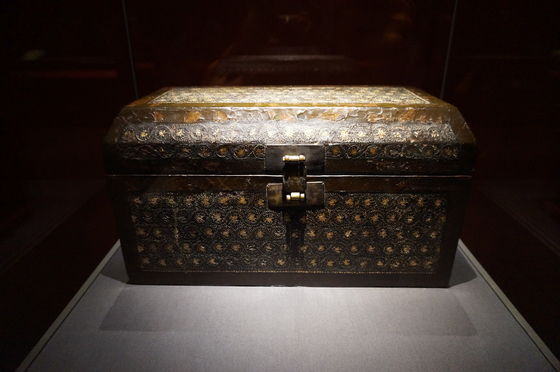 Treasure No. 1975, the Sutra Box Inlaid with Mother-of-pearl. [ESTHER CHUNG]


Treasure No. 1975, the Sutra Box Inlaid with Mother-of-pearl is also a unique treasure related to Buddhism. The lacquerware piece is used to store Buddhist sutras, or texts, and is inlaid with mother-of-pearl designs of small peonies. Made in the late Goryeo dynasty, the box left Korea in unknown hands until its return in 2014, when an individual bought it from Japan and donated it to the museum.