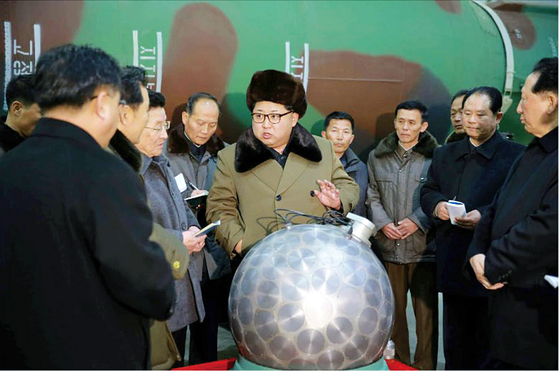 North Korean leader Kim Jong-un, center, poses with what the North claimed was a miniaturized nuclear warhead, in a photograph released by state media in 2016. [RODONG SINMUN]


South Korea’s Ministry of National Defense on Tuesday said Pyongyang has already attained considerable success in miniaturizing its nuclear weapons, in response to a similar claim reportedly contained in a confidential UN report.

According to a story published Tuesday by Reuters, an interim report drafted by the 15-member United Nations Security Council sanctions committee on North Korea concluded the regime had “probably developed miniaturized nuclear devices to fit into the warheads of its ballistic missiles.”

Defense Ministry deputy spokesman Col. Moon Hong-shik confirmed the North has reached a “significant” level in terms of its miniaturization technology, a designation which he stressed Seoul had publicly acknowledged on multiple earlier occasions.

South Korea, however, “does not accept North Korea as a nuclear state,” Moon said.

The spokesman added South Korean and U.S. intelligence were closely watching the North’s missile development. The allies’ assessments on the regime’s miniaturization technology had already been listed in Seoul’s 2018 defense white paper.

According to Reuters, one of the countries responsible for the report assessed that Pyongyang may work to further develop miniaturized nuclear devices “in order to allow incorporation of technological improvements such as penetration aid packages or, potentially, to develop multiple warhead systems.”

With denuclearization negotiations at a perennial deadlock since last year, North Korea has been officially proclaiming its intention to continue nuclear weapons development.

In a high-profile speech delivered to mark the anniversary of the 1950-53 Korean War armistice last month, the regime’s leader Kim Jong-un said the country’s “reliable and effective self-defense war deterrence” would forever prevent the likelihood of war and allow its national security and future to be “guaranteed permanently.”

The North has claimed it succeeded in miniaturizing its nuclear warheads on multiple occasions, beginning in the early 2010s. Kim Jong-un also made a prominent claim to that effect in 2016, warning of an “all-out offensive” and “pre-emptive” strikes against Seoul and Washington at the time.

Experts abroad doubted those early claims, but in recent years a consensus has grown that the regime indeed had made significant progress — or already possesses — the ability to put nuclear devices atop its numerous ballistic missiles.

Such a capacity would hold grave security implications for the United States, given that Pyongyang is believed to be in possession of intercontinental ballistic missiles like the Hwasong-14 and 15, theoretically capable of reaching North America.

No time for illusions (KOR)