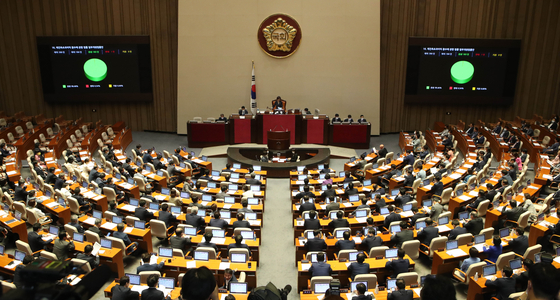 Members of the National Assembly during a plenary session on Tuesday. [OH JONG-TAEK]


With most members of the opposition party boycotting Tuesday's plenary session, the National Assembly nonetheless passed three bills to help launch a new agency with the power to investigate senior public servants.

The passage of the three bills is expected to speed up the process of establishing the Corruption Investigation Office for High-Ranking Officials (CIO), a major initiative of the ruling Democratic Party (DP).

Although legislation to establish the CIO was passed last year, the office has not yet been created, as the continued boycott of lawmakers from the opposition United Future Party (UFP) has left the CIO director position vacant.

According to the law governing the CIO, a committee to nominate the director is supposed to have seven members, with the minister of justice, the minister of the National Court Administration and the president of the Korean Bar Association automatically included.

The ruling party is supposed to appoint two members, and opposition parties with more than 20 lawmakers must name the remaining two. The UFP is the only opposition party that meets that threshold.

Six out of seven committee members must vote to nominate a candidate, effectively giving the opposition veto power.

Under the new legislation, the speaker of the National Assembly now has the power to set a deadline by which members of both parties are required to assign members to their slots on the nominating committee. One of the bills also requires that the director, after being nominated, will be subject to a confirmation hearing in the National Assembly.

Members of the UFP present at the plenary session on Tuesday repeated their argument.

“There are no legal grounds provided by the Constitution of Korea that say such an agency with vast powers to open investigations and indict people could be created independent of executive, legislative and judicial powers of the government,” said UFP Rep. Yoo Sang-bum. “It will shake up the balance of power in Korean government.”

The law governing the CIO states that it will have jurisdiction over 6,500 senior officials, including the president and his or her immediate relatives; senior presidential aides; the National Assembly speaker and lawmakers; the Supreme Court chief justice and judges; the Constitutional Court chief justice and judges; the prime minister, ministers and vice ministers; the prosecutor general and prosecutors; mayors, governors and education office chiefs; and senior police and military officers.

The agency has the power to indict Supreme Court justices, the prosecutor general, judges, prosecutors and police officials, precluding the prosecution from being able to protect its own members from criminal charges.