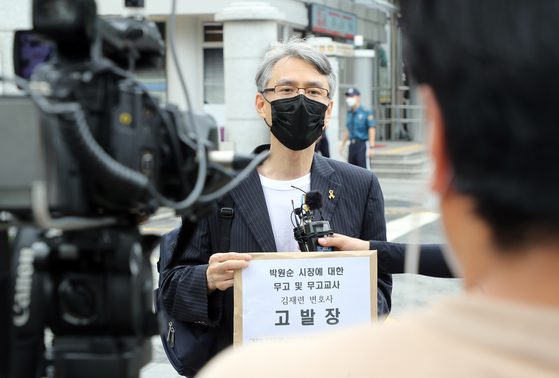 Police said Tuesday that a former secretary of the late Seoul Mayor Park Won-soon who accused him of sexual harassment will soon be summoned alongside her former colleagues at the Seoul city government for a cross-examination of their testimonies.

Talks about a specific schedule are currently underway, according to officers from the Seoul Metropolitan Police Agency.

Police said they're considering using a lie detector because both sides were offering “partially different” accounts of what had transpired between the victim and Park. The mayor committed suicide one day after the accuser filed a complaint with Seoul police accusing him of sexually harassing her for more than four years.

The woman has also accused about 20 of her colleagues in the Seoul government office of aiding and abetting Park’s unsolicited sexual advances toward her and ignoring her calls for help when she confided in them about her struggles, though the colleagues deny this.

On another front, the Seoul police agency said two people have been booked on charges of disseminating information about the victim’s July 8 sexual harassment complaint online. The information spread rapidly after it was posted on the internet.

Police added that eight people have been booked on charges of inflicting “secondary damage” on the victim, for allegedly writing malicious comments about her on online forums.

A group of activists supportive of Park and the Moon Jae-in administration — both Democratic Party (DP) members — said Tuesday they have formally filed a complaint with the Korean National Police Agency to charge the victim’s lawyer on allegations of making false accusations.

Shin claimed that the “promiscuous photos” the victim claimed to have received from Park through the encrypted messaging app Telegram were actually pictures of him in his running shirt, which other Seoul Metropolitan Government officials had also seen.

Neither Kim nor the secretary have revealed what photos she received from Park, only saying they featured the mayor in his “undergarments.”

“This is a case of false accusation and instigating false accusations on the part of lawyer Kim, because even without an ample amount of evidence, she convinced the accuser [to file a complaint with the police] and has been distorting [the truth] to make it appear that Park had continuously carried out sexual harassment,” said Shin.

“The accuser [Park’s former secretary] came to me first, and I only decided to carry out the complaint because she seemed to be in need of legal assistance,” Kim said. “The perpetrator was not a subject of consideration at all,” she stressed.