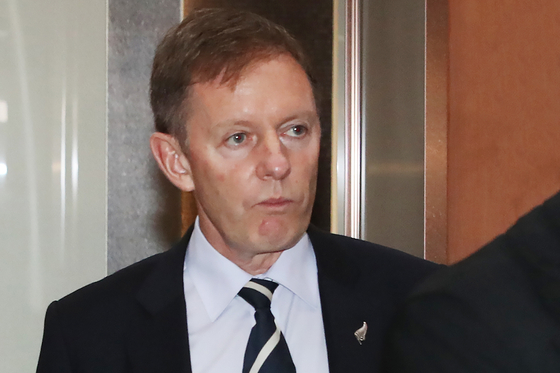 New Zealand’s Ambassador to Korea, Philip Turner, on Monday visited the Foreign Ministry building in Seoul to bring a Korean diplomat accused of sexual harassment in the Korean Embassy in Wellington to justice in New Zealand. [YONHAP]


Ramayana, meaning the Chronicle of King Rama, is a Sanskrit epic poem in ancient India. Third century B.C. poet Valmiki compiled the story from 11th century B.C. It is an adventure of Rama, the Prince of the Kosala Kingdom and reincarnation of Vishnu, ascending to the throne. Demon king Ravana is the archenemy of Rama. In the story, Ravana attempts to kill an envoy to his kingdom. Ravana’s sibling discourages him, saying that according to old customs, a messenger or envoy should not be killed. The privilege of diplomats goes back thousands of years.

But the common law is not always respected. There are many moments in history when a diplomat or envoy is executed during a war. Mongols, who built an extensive empire across the Eurasian continent, demanded diplomatic privilege from other countries. If its diplomats were harmed, the Mongols retaliated by annihilating that state. The Khwarezmian Empire had killed a Mongolian envoy and caravan in the early 13th century and was destroyed. After the French Revolution, the revolutionary government and Napoleon imprisoned some diplomats in Paris for acting hostile to France.

In diplomatic relations, unfair situations can happen, and misunderstanding and discord may arise. It is not easy to determine right and wrong. When disputes became more frequent, the international community sought solutions. On April 18, 1961, the UN Conference on Diplomatic Intercourse and Immunities was held in Vienna, Austria, and the 53rd article of the Vienna Convention on Diplomatic Relations was adopted. Three years later on April 14, 1964, it was enforced. Article 29 states that diplomats must not be liable to any form of arrest or detention, and Article 31.1C states actions not covered by diplomatic immunity include professional activity outside diplomats’ official functions. Immunity for diplomats is the key provision of the convention.

The New Zealand government is pressuring the Korean government over a diplomat alleged of sexual harassment. The Prime Minister and foreign minister demand to proceed with legal procedures in New Zealand. There are different interpretations on how the immunity of diplomats is applied. Domestic opinions don’t seem to be favorable to the foreign minister and the diplomat in question. Experts advise the ministry to see a “diplomatic” solution. The meaning of “diplomatic” is profound indeed.