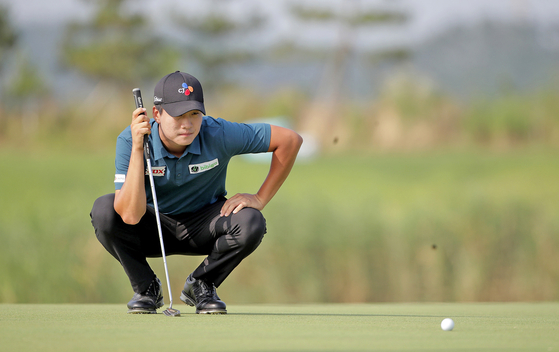 Kim Min-kyu reads the line of his putt during the second round of the KPGA Open at Sollago Country Club on July 17. [YONHAP]


After the Covid-19 pandemic shut down Europe, 19-year-old Kim Min-kyu had no choice but to return to Korea and compete in the KPGA Tour for the first time.

Kim doesn't actually have a status card on the KPGA Tour, but has competed in two tournaments this year by invitation. After finishing as runner-up in both the KPGA Gunsan Country Club Open and KPGA Open at Sollago Country Club, the young star is now being hailed as the next big thing in Korean golf.

Born on March 24, 2001, Kim joined the KJ Choi Foundation in 2011 and went on to become the youngest player ever to join the Korean national team in 2015. After graduating middle school, Kim made the unusual decision to pursue a career in Europe, leaving Korea to train and eventually turn pro there.

The Korea JoongAng Daily sat down with Kim at a cafe in Yongin, Gyeonggi, on July 22. Below are edited excerpts of the interview.


Q. How did you first become interested in golf?

A. I started golfing when I was five or six. My dad taught me to play. I did kind of play when I was younger, but it wasn't until I was five or six years old that I actually started playing properly and we started thinking I was going to try and go pro.


Q. What’s the difference between playing as a career and playing for fun?

A. When I was younger, I just went out to play once in a while. Like I would go there when my dad went, and it was more like I was messing around. But once my dad and I decided I was going to try and go pro, I started practicing every day.


Q. When did you start competing in tournaments?

A. I competed in my very first tournament when I was a first grader in elementary school, because that's the minimum age to compete. I think I probably shot over 100.


Q. Did you always enjoy golf?


A. To be really honest with you, I don't have many memories from when I first started. I think I just played because my dad told me to. Rather than having fun playing golf and wanting to pursue a career in the sport, my dad just chose my career for me. So I just kept on playing because I had to. 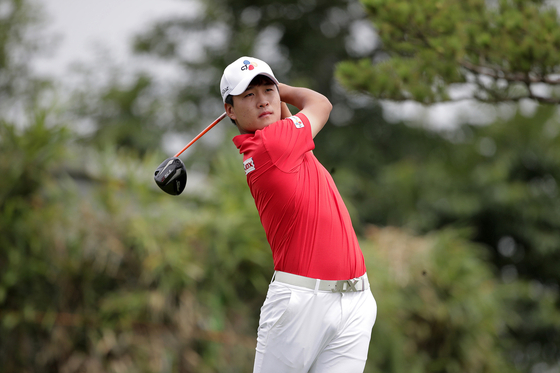 
Once I got to third or fourth grade in elementary school and started shooting in the 70s and winning, I think that's when I actually started having fun playing the sport. As I was young and getting compliments, I felt good. That's when I first felt that golf was actually fun.


Q. So what makes golf fun?

A. I would say the feeling of achieving my goal. Since golf takes a long time and requires a lot of concentration, going through that and achieving your goal is the biggest factor that makes golf fun.


Q. How do you normally count the holes or your score during the round?

A. When I was in second or third grade of elementary school, a female pro once told me that if I made a bogey every three holes, then that would make my score 78 by the end of the round. So since then, I've only thought about that, but as I got better the bogeys turned into birdies. It has changed to one birdie every three holes, and if I do that I'll be six under par.

When I play on a difficult course, I just go hole by hole, but on easier courses, I tell myself to make one birdie every three holes. It's like even if I make a bogey or two, then I'll still shoot for under par.

Q. You’ve been competing since you were in first grade in elementary school. Do you still get nervous on the first hole?

A. I would say the first hole gives me the most nerves, unless I'm competing for the title on the final day when of course I'll be a lot more nervous.


Q. You’ve been competing in Korea due to the coronavirus pandemic. How do you find the KPGA?

A. When I played in Europe, I had to go to different countries by myself so there were some difficulties. Competing in Korea is a lot more comfortable. That's the biggest thing I think. I can eat whatever food I want, so things like that, I really like it.

Since all the Korean golfers are there, when I go to the course for a tournament I see all the players that I know, and the atmosphere of the tournament is just great, maybe because it's the KPGA Tour, which is top-tier. So it's really fun.


Q. In a regular season you travel a lot. How do you deal with that?

A. I go to local restaurants. I also eat Bibigo meals [made by sponsor CJ], but since they take up a lot of space, I can't take a lot. I can only take one or two. There are Korean restaurants, but I'm not the kind of person who will always seek them out.


Q. You were the youngest player to join the national team, but right after you graduated from middle school you left Korea. Do you think that was the right decision?

A. Once again, that decision was made by my dad.

At the time, I wanted to stay in Korea because I was on the national team and I wanted to wait for the Asian Games [to be in with a shot at a military service exemption]. But my dad said that since I'm going to turn pro, if I keep on playing for the national team them I'll just be full of myself and not improve. He's not saying that's true for all players, but he is saying it would be true for me.

Since there's no guarantee I would win a gold medal at the Asian Games [to secure a military service exemption], my dad told me to go overseas and worry about that stuff later, but I kept saying no. My dad kept pushing me, and in the end I ended up going right after graduating from middle school. Looking back now, I think it was a really good decision.

Q. How did it feel to be the youngest member on the national team?

A. It was great because I got to be the youngest member ever, and that's a title I would never have a chance at getting again, so I think it's pretty meaningful.


Q. This is your first time playing on the KPGA Tour. But you’re competing on empty courses, without any fans. How does it feel?

A. I feel like it would be a lot more fun if there were fans on the course because they'd be cheering and screaming. It just feels like the course is empty, like I'm just playing a normal round of golf. But I think those factors make me feel a little more comfortable. On days when I play well, I wish the galleries were out there to watch me, but there’s also that side where it makes me feel more comfortable.


Q. You’ve had two straight runner-up finishes. Was that disappointing?

A. Well at the first tournament, I was ranked 30th after the third round. I played well on the final day so that runner-up finish was unexpected. But in the second tournament, I was ranked toward the top. So it was a very disappointing runner-up finish, but I don't have any stress from it. Although it was disappointing, I feel like I played better than I expected in those two tournaments.

Before I started competing, I set my goal to win, but I didn't expect to have two runner-up finishes. Since I played in Europe and some people had an interest in me, I tell myself just don't miss the cut. That's why I don't think I'm getting stressed.


Q. Who helped you reach this point?

A. Back when I was little, I was the type of kid that couldn't focus. I liked to play around with my friends, so my dad had to be very strict. But thanks to him, I think I was able to continue playing without falling behind other players of my age. So I would say my dad.


Q. Who is your role model?

A. My role models are K.J. Choi and An Byeong-hun. I was in K.J. Choi's foundation when I was little. So I went to off-season training with him. In addition to playing well, it's really hard to take care of others because he's really busy. But he still flew to China to join the off-season training when he could have trained on his own in a better environment in the United States. He is a very respectable man and I've heard great things from him since I was little.

As for An Byeong-hun, he also went from the European challenge to the European Tour and then to the PGA Tour. Since I also went to the European challenge, when I heard his story I was interested in him. Since we’re both under CJ, I got to know him. He’s really nice. When I tell him that I'm not hitting as well, he tells me to send a video of my swing. Rather than skimming through it he actually looks into it on his iPad and makes comments and analyzes it to give me detailed feedback.

I heard that An takes care of younger players, and since he takes a lot of care of me, I'm very thankful.


Q. There have been a lot of headlines about you, the teenage sensation, and a lot of them mention how mature you are. What’s your personality actually like on and off the golf course?

Q. What are your strengths and weaknesses?

A. I think my strength is that I hit irons well and my weakness is that I struggle at putting sometimes. There are many times when I struggle with my putting. Since my shots are good, the difference in the score comes from putting. It's great when I'm putting well but on days when I'm not, I think my score gets a little higher.


Q. How do you feel about your score so far?


Q. What are your short-term and long-term goals?

A. As for the short-term goal, I think for now, it would be to pick up my first win this year because I'm playing in Korea. Next year I want to go to the Korn Ferry Tour.

In the long term, it would be to get onto the PGA Tour. I'll think about what my next goal is once I achieve all that. Of course I want to win, but for now I'll just stick to those.