"Radon mattresses" stacked at the open warehouse of Daijin Bed, the manufacturer of the beds that were contaminated by the carcinogenic material, in August 2018. The solution for the contaminated mattresses is still being discussed. [JOONGANG ILBO]


In 2018, mattresses from a local manufacturer were found to contain excessive amounts of radioactive element radon, prompting a mass recall and raising fears so much that sales of at-home radiation testing devices shot up.

Two years have passed and huge piles of mattresses still lay untouched at Daijin Bed’s warehouse in Cheonan, South Chungcheong. The company closed down its Cheonan factory in March 2019.


The residents' long-standing concerns about the pile of mattresses have recently been aggravated by heavy rain in the area.

“With contaminated waste stacked outside, it’s natural for residents to be worried that the rain will leak the waste and flow into land and streams nearby,” said Lee Sung-jin, the policy director at the Korea Federation for Environmental Movements.

According to the Nuclear Safety and Security Commission (NSSC) and Ministry of Environment, the warehouse yard contains 480 tons of leftover mattresses and waste from mattresses and beds that have already been destroyed.

Back in 2018, elements of mattresses and beds that were contaminated with radon were removed and destroyed, but the waste from that process was never removed.

Since the recall began in 2018, experts and civic groups have argued that the radon waste needs to be sent to a radioactive waste disposal facility in Gyeongju, North Gyeongsang.

“Contaminated mattresses need to be categorized as low-level radioactive waste, so they can be sealed and stored at the radioactive waste disposal facility,” said Lee Deok-hwan, a chemistry professor at Sogang University. “They need to be treated with antiradiation protection clothes and gloves after use.” 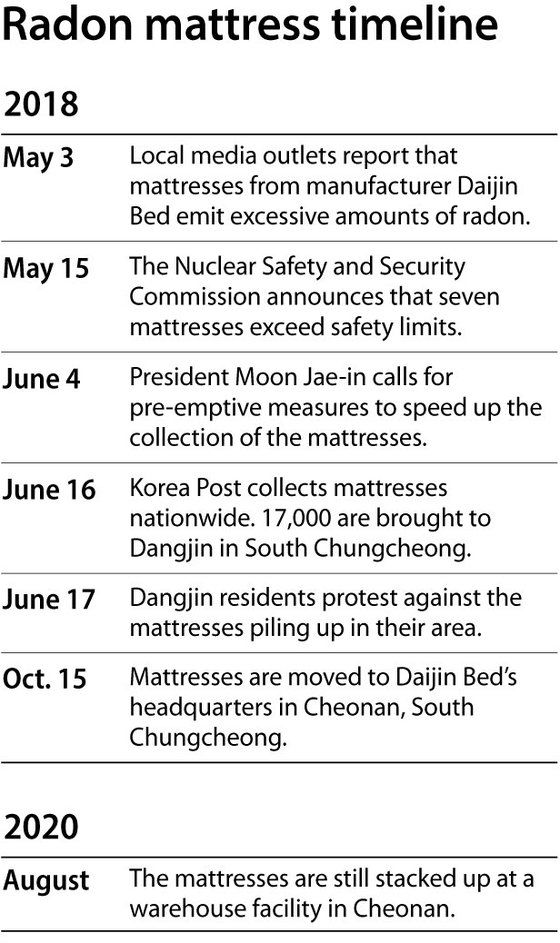 However, the NSSC had a different opinion. From their perspective, mattresses are not included on the list of radioactive waste items under the Nuclear Safety Act. Currently, only materials used in nuclear power plants and hospitals are classified as such under Korean law.

The NSSC says it’s the Environment Ministry’s responsibility to deal with the mattresses, according to laws on general waste control.

The Environment Ministry took charge of the disposal following “guidelines against radiation in the natural environment.” But this law does not stipulate particular measures of disposal, merely stating that unfit products must be recalled and disposed of by the manufacturer.

“Since May 2018, the ministry has been discussing with related ministries to come up with amendments that specify the method and procedure of mattresses contaminated by radon,” said Kim You-kyung, an officer at the Waste Resources Management Division at the Environment Ministry. “At the earliest, the enforcement ordinance and regulation will be pre-announced by the end of this month.”

The Environment Ministry is planning to distinguish between extinguishable and nonextinguishable mattresses and decide between burning or burying them.

Civic groups say the government has spurred anxiety among residents by moving too slowly.

“If the legislation is pre-announced now, it will take from six months to a year until it is actually implemented,” said Lee of the Korea Federation for Environmental Movements. “It’s nonsense that the disposal process is beginning three years after the debacle."

The government has said there is no need to worry about toxic emissions from the mattress waste.

“We are monitoring the situation periodically via the radiation monitor that operates 24 hours,” said Chae Hee-yeon, director of the Environmental Radiation Safety Division at the NSSC. “There have been zero instances where a harmful substance was detected due to the weather. The anxiety among residents has also subsided after constant communication.”

But the experts still aren't convinced by this plan.

“It is nonsense that the government abandoned the toxic materials and kept them stacked,” said Sogang University chemistry professor Lee. “The Environment Ministry’s plans to burn them after so much time has passed will face a backlash from residents. It would be wiser to treat them as nuclear waste and dispose of them.”