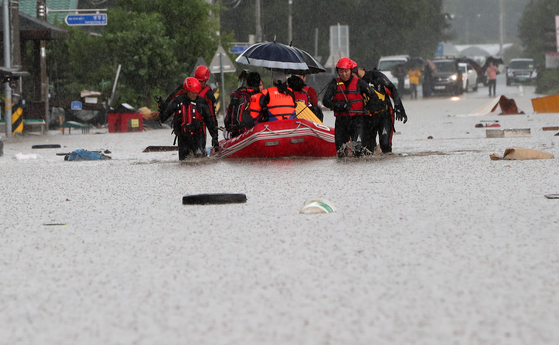 Rescue workers evacuate villagers in Cheorwon County, Gangwon, on Wednesday afternoon, after the region was hit by torrential rain. [YONHAP]


As Korea copes with floods and landslides in one of the longest rainy seasons on record, the national weather agency finds itself in deep water over repeated failures to predict the rains.

In May, the Korea Meteorological Administration (KMA) forecast this summer would be one of the hottest in recent memory, with temperatures peaking in late July and early August.

Instead, the country was hit by intense downpours that have wreaked havoc in parts ranging from northern Gyeonggi to as far south as South Chungcheong and Daejeon.

The rains claimed the lives of 15 people from Saturday to Wednesday, with 11 others missing. A total of 1,587 people, most of them from North and South Chungcheong, were displaced from their homes, said the government’s Central Disaster and Safety Countermeasure Headquarters.

The intense rains that battered the Korean Peninsula, China and Japan this summer resulted from what meteorologists call “blocking” patterns, which have been occurring with greater frequency as the globe warms up due to human greenhouse gas emissions.

Blocking essentially entails events in which the jet stream — a current of fast flowing air in the atmosphere that keeps weather systems moving across the earth — is blocked for an extended period of time.

In this case, unusually high temperatures in the Arctic weakened the jet stream, while anticyclones in northeast China trapped cold air around the Korean Peninsula and its neighboring regions. The meeting of that cold air with high pressure from the North Pacific along stationary fronts across thousands of kilometers have caused torrential rains across East Asia, the KMA said.

Exacerbating the situation was Typhoon Hagupit, which meteorologists blame for this year’s rainy season being especially wet.

But natural irregularities may not be solely to blame for the KMA’s forecast failures, some critics say.

The agency’s use of the Korean Integrated Model (KIM) forecasting system, which the KMA implemented in 2018 after years of development, was relatively successful in predicting the movement of a series of typhoons last year, but has repeatedly fallen short with the rains this summer.

On KIM’s potential shortcomings, a KMA official said there was no forecasting model in the world that was able to precisely predict regional heavy rains limited to a small area. “But we are continuously working to expedite our forecasts for specific regions so that local authorities can prepare themselves for sudden torrential downpours,” the official said.

Irregular bouts of rain continued to batter central Korea throughout Wednesday, with areas of northern Gangwon, Gyeonggi and North Chungcheong receiving around 40 millimeters (1.6 inches) of rain per second.

The water level at the Soyang River Dam in Gangwon, a vital piece of infrastructure that controls water levels on the entirety of the Han River, reached a danger mark of 190.3 meters (624.3 feet) on Wednesday, forcing authorities to literally open the floodgates to prevent damage to the dam.

Five gates were opened at 3 p.m., according to the Korea Water Resources Corporation (KWRC), releasing around 3,000 tons of water per second down the Han River. It was estimated water levels on the river would rise by around 2 meters, though the released water was predicted to reach Seoul only around 16 hours later.

It marked the first time in three years the Soyang River Dam opened its floodgates due to heavy rain. Rising water levels on the Han have already caused flooding in several parts of the riverbed in Seoul, and concerns are growing that such flooding may be exacerbated by the dam’s opening.

A KWRC official said the decision to open the floodgates was made with further precipitation conditions considered, but advised people from avoiding the Han’s riverbed downstream.

The KMA meanwhile warned more rain was expected across central parts of Korea throughout Wednesday evening to Thursday, with Seoul, Gyeonggi, western Gangwon and Chungcheong predicted to receive around 100 to 200 additional millimeters.