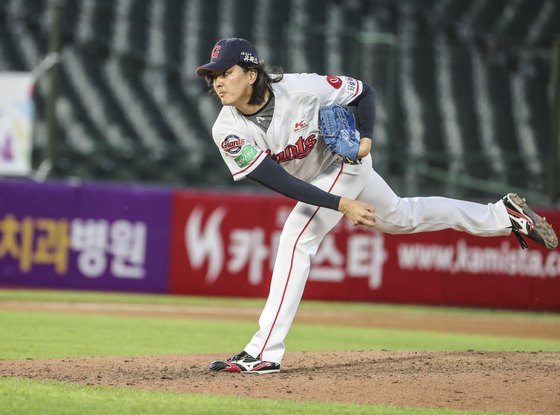 Kim Won-jung of the Lotte Giants throws a pitch during a game against the SK Wyverns at Sajik Baseball Stadium in Busan on July 5. [YONHAP]


Kim Won-jung of the Lotte Giants is finally looking comfortable in his new position.

Kim's a popular figure with Giants' fans, but more for his looks than his ability on the mound — in previous seasons he's often had an ERA above 5.00 or even 6.00.

This year, Kim's finally proven his worth on the field.

After the Giants finished the 2019 season with a disappointing last place finish in the regular season, they made some big changes to their roster. Among those was a surprise decision not to re-sign former closer Son Seung-lak. Although Son hadn't had the best season, not signing him left a huge hole at the end of the bullpen with no obvious candidates to fill in.

But newly appointed manager Her Mun-hoe recognized Kim's potential and chose to assign him as closer rather than hiring a new arm. The decision raised concerns among fans as Kim had only played as a starter — and a fairly unimpressive one — since making his KBO debut with the Giants in 2015.

However, looking at the control of his pitches, closer may be a more suitable position. Standing at 1.92 meters (6 feet 3 inches) tall, Kim's strengths are his four-seam fastball and a forkball with a big curve, and he has the ability to throw those pitches at an average speed of 150 kilometers per hour (93 miles per hour).

Despite his strength, Kim is more concerned about his weaknesses: his curveball and slider. This put him at a disadvantage when it came to playing as a starter, since they have to face the same batters a number of times throughout the game and a good arsenal of varied pitchers is key.

But since closer does not require pitchers to have the ability to throw as many pitches, Kim seems more comfortable in this position. Playing for a shorter time has also seen Kim throw much faster, with his four-seam fastball increasing from an average 143.3 kilometers per hour last year to 147.3 kilometers per hour this year.

Her has worked hard to ensure that Kim is able to establish himself as a closer without too much pressure. Throughout the first half of the season, Her only used Kim in situations where he could pick up a save and also didn't let him pitch more than one inning per game.

Looking at the numbers, it certainly worked. Although the season is a long way from over, Kim is cruising through with an ERA of 1.86, the lowest it's ever been in his career.

This is Kim's sixth year in the KBO and so far, as of Tuesday's game, he is looking good. Having appeared in 28 games for the Giants as closer, Kim has picked up two wins, one loss and 12 saves, with a 1.86 ERA. The 12 saves are good enough for him to be ranked third in the league saves standing.


While the majority of the clubs are struggling with their bullpen this season, the Giants seem to be an exception. Although Kim has had four blown saves so far, considering the Giants have been struggling and saves haven't necessarily been an option very often, his 12 stand out.

Along with his new role, Kim also joined the ranks of pitchers with long hair this season. Kim says that he grew his hair to hide his emotions.

“When I'm in a risky situation, my face gets really red,” he said. “Which doesn't make me look threatening. By growing my hair, it allowed me to have a more stable state of mind.”

As of Wednesday 6 p.m., the Giants are ranked seventh in the KBO's 2020 regular season standing with 36 wins and 35 losses, two games behind the fifth-ranked KT Wiz and Kia Tigers.