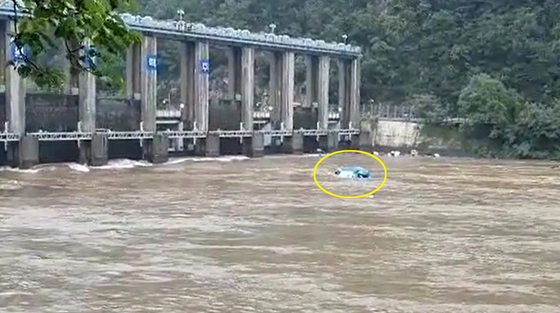 A capsized boat floats toward the Euiam Dam in Chuncheon, Gangwon, after it and two other vessels overturned in an accident caused by rapid waters flows. [YONHAP]


One man was found dead and five others remain missing after three boats capsized above a dam in Chuncheon, Gangwon, where heavy rains the day before prompted authorities to open the floodgates.

The Gapyeong Police Department said they found the body of the 69-year-old repair worker among docks downstream from the Euiam Dam in Nami Island in Gyeonggi.

The man had apparently drowned after his boat and another vessel were overturned by rapid water flows on the Bukhan River.

The two boats were attempting to salvage a police boat that had capsized while working to repair a facility around 500 meters (0.3 miles) upstream from the dam.

According to the Chuncheon Police Agency, a total of eight people — police officers, ordinary citizens and Chuncheon city officials — were on the three boats when the accidents happened, and one person was rescued on the spot.

The seven others were swept through the floodgates of the dam down the river. One of the victims was rescued alive near a bridge around 10 kilometers (6 miles) downstream from the dam.

With concerns of flooding due to heavy rains throughout this week, the Euiam Dam opened its floodgates Sunday evening and has been releasing around a ton of water every second since.

The accident may be one of the deadliest caused by torrential rains that poured across the central part of the Korean Peninsula throughout this week.